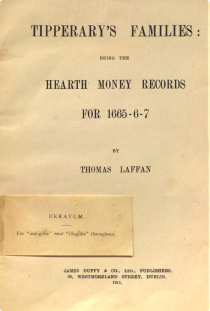 Tipperary Families : Being The Hearth Money Records for 1665-1667 by Dr. Thomas Laffan (1842-1918) was published in 1911 with an introduction by the Roman Catholic Archbishop of Cashel and Emly, Rev. Thomas Fennelly. The records list the name of the head of each household in the parishes of the baronies of County Tipperary subject to the hearth tax introduced during the reign of King Charles II. The records demonstrate how society in particular the Gaelic Irish recovered following the upheavals of the Cromwellian invasion and plantations just over a decade before.

County Tipperary or Tiobraid Árann or 'The Well of the Arra' takes its name from the town of the same name in the south of the region. The actual well is in the parish of Lattin Cullen but little is known of its historical significance. Until the 12th century Norman invasion, Tipperary was ruled by an assortment of Gaelic tribes which included the O'Carroll, O'Fogarty, O'Meaghers, O'Spillane, O'Ryan, O'Dwyer, MacCarthy, O'Sullivan, O'Callaghan and O'Brien clans. Meanwhile Cashel was the seat of the Kings of Munster. The Gaelic Irish were in a state of near constant warfare which facilitated their conquest by the Normans in the 12th century and most of the area came under the control of the powerful Butlers of Ormonde with their stronghold at Kilkenny.

The Gaelic Irish were allowed to keep their lands in return for tribute and service to their Butler overlords. County Tipperary officially became a county in 1253 and divided into the baronies of Clanwilliam, Eliogarty, Iffa and Offa East,  Iffa and Offa West, Ikerrin,  Kilnamanagh ,  Middle Third,  Ormond Lower,  Ormond Upper,  Owney and Arra and  Slievardagh . By the 14th century outside of Dublin and the Pale most Norman families had intermarried with the Gaelic Irish and adopted their customs and language. Typical Norman names in the area include Butler , Burke, Fitzgerald, Prendergast, Purcell and others.

After the English Reformation, the Gaelic Irish and the Old English descendants of the Norman conquerers refused to renounce their Catholicism. A series of Catholic rebellions and plantations of British Protestant settlers followed. The defeat and flight of the Gaelic Earls of Tyrconnell and Tyrone led to the Plantation of UIster beginning in 1609. In 1641 a renewed Catholic rebellion led to the creation of the Catholic Confederacy which for a time ruled two thirds of Ireland from their stronghold in Kilkenny. Led by James Butler, 1st Duke of Ormonde, they supported the deposed King Charles I. The Lord Protector Oliver Cromwell's invasion of 1649 and the final defeat of the Catholics in 1653 led to the almost complete transportation of the Gaelic population of Tipperary to Connaught .

Tipperary was given to Cromwell's soldiers as payment for their services but the Gaelic Irish were soon to return. Many Protestant settlers grew tired of rebel attack, sold their property and returned to Britain . After 1660 when the Protectorate came to an end and the British monarchy was restored under Charles II, British Protestant, Catholic Old English and Catholic Gaelic Irish families shared the countryside. In the middle of the decade the hearth tax was introduced as it was considered easier to establish the number of hearths than numbers of people for the purposes of taxation. The records from the years 1665-1667 demonstrate that the Catholic Gaelic Irish population of Tipperary had returned and now outnumbered the Protestant planters.

The hearth tax was abolished during the reign of King William III of Orange and Mary II in 1689 following the 1688 Glorious Revolution that sparked renewed Catholic revolt in Ireland including Tipperary . Gaelic Irish soldiers and Old English nobles from Tipperary were present during the Catholic defeat at the Battle of the Boyne in 1690 and the final surrender at Limerick in 1691. The tax remained in force in Ireland until 1795 when it was abolished in a futile attempt to prevent renewed rebellion in 1798.

Rebellions, wars and penal laws that followed created an Anglo-Irish Protestant landlord elite and an impoverished Irish Catholic underclass of tenant farmers and peasants in County Tipperary and across the island of Ireland . Catholic Emancipation was achieved in 1829 before the catastrophic Great Irish Potato Famine of the 1840s inspired decades of agrarian agitation in the late 19th century.

By 1911 when Laffan's book was published, Tipperary tenant farmers were in the process of buying out bankrupted Anglo-Irish landowning families. During the Irish War of Independence 1919-21 and the Irish Civil War 1922-1923, guerrilla war engulfed County Tipperary . The country houses of Anglo-Irish Protestant gentry were destroyed by arson most notably the home of Senator John Philip Bagwell, at Maryfield, Clonmel. His ancestor John Bagwell had been a captain in Cromwell's Army.

Dr. Thomas Laffan born in 1842 was the son of a solicitor and became a well known politician and philanthropist. During his career he was an anatomist at the Catholic University , Dublin , wrote for the English and French medical press, was president of the South Eastern (Irish) branch of the British Medical Association, was a surgeon in Cashel Infirmary and a member of Cashel Urban Council. He died in 1918.

Previous - Knowles: Fethard, its Abbey, etc.
Next - Sheehan: Nenagh And Its Neighbourhood