Sheehan: Nenagh And Its Neighbourhood 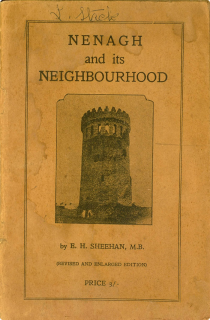 Nenagh and Its Neighbourhood by E.H. Sheehan, a booklet published in 1976, is an anecdotal history of the town of Nenagh and surrounding localities in North Tipperary.

Nenagh and Its Neighbourhood by E.H. Sheehan, a booklet published in 1976, is an anecdotal history of the town of Nenagh and surrounding localities in North Tipperary.

Nenagh and Its Neighbourhood by E.H. Sheehan, a booklet published in 1976, is an anecdotal history of the town of Nenagh and surrounding localities in North Tipperary. While it lacks a clear narrative and analysis, it is highly detailed. Sheenan used a variety of sources such as contemporary local newspaper articles, the Registry of Deeds, the Land Commission and family records among other sources. Sheehan gives an impressive detailed picture of the growth of the town, street by street and house by house during its expansion especially during the 18th century including the names of inhabitants. Sheehan’s local knowledge is spliced together with information gleaned from official records.

He describes the various landed Anglo-Irish Protestant family dynasties that came into possession of large estates in North Tipperary following the Cromwellian invasion of the 17th century. These aristocratic families dominated the economic, political and social life of the area until the 19th century. The agitations of Fenians, the Land League and the Irish Parliamentary party led to gradual, largely peaceful, reforms that empowered Catholic tenant farmers.

Sheehan covers incidents of political and social upheaval such as the 1798 rebellion, the visit of Daniel O’Connell to Nenagh during his drive for Catholic Emancipation, the horrors of Nenagh workhouse during the Great Famine of the 1840’s, the violent mutiny by the local British garrison in 1858 and the arrests of Fenian rebels in the latter half of the 19th century. There are descriptions of duels between respectable gentlemen and peasant faction fighting at local fairs illustrating a society that was very much dominated by class and violence. 19th century legal cases such as the hangings of two innocent McCormack brothers falsely convicted of the murder of a land agent and the acquittal of Dr. Langley who was accused of his wife’s death provide a window into a different time.

The early 20th century saw the outbreak of the Great War with large numbers of men from Nenagh and North Tipperary joining the ranks of the British military. A strong pro-British sentiment that persisted in Ireland following the violent 1916-23 Irish revolutionary period is reflected by the warm reception given to the widow of the British commander General Douglas Haig who visited Nenagh in 1929.

The booklet is important because for many years local historical research in Ireland was neglected. Sheehan’s work is original and valuable but nonetheless does not always reveal its sources which is problematic for other researchers who wish to write their own local histories.