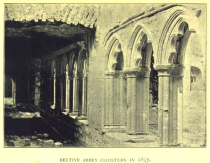 Fr. Anthony Cogan (1826-1872) was a priest and scholar of the diocese of Meath. He was born in Slane, County Meath c1826 and died there, according to his memorial in Slane Roman Catholic church, at the age of 45 years.

His three volume diocesan history was a massive undertaking. The great strength of the work is that Cogan made great use of an extensive archive, which included manuscript materials from the early 17th century. Cogan encouraged the bishops of Ireland to preserve chronicles of their dioceses for future generations. Sadly, the archive that he established in Meath does not survive. In 1909 Bishop Gaughran ordered that virtually the entire diocesan archive be burned.

Previous - Westmeath
Next - Dease: A Complete History of the Westmeath Hunt