Dease: A Complete History of the Westmeath Hunt 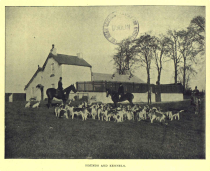 Hounds and Kennels, taken from A Complete History of the Westmeath Hunt by Edmund F. Dease, 1898.

Hounds and Kennels, taken from A Complete History of the Westmeath Hunt by Edmund F. Dease, 1898.

Hunting with hounds was a popular activity in ancient times reflected in the myths and legends of Fionn and the Fianna. The Norman conquerors and later the Anglo-Irish Protestant gentry who replaced the Gaelic and Old English gentry also continued the pursuit. The earliest mention of hunting in County Westmeath is of Bishop Dopping who kept hounds in the district of Lowtown close to Killucan.

The Irish hunting season traditionally began in the month of November and continued through to March. Both male and female landed gentry participated and these activities were the height of the social calendar concluding with the annual Hunt Ball. Those involved in hunting in Westmeath reads as a "who’s who" of local landed gentry.

The powerful and wealthy Pakenham family with their homestead at Pakenham Hall (present day Tullynally Castle ) maintained a pack of hounds and stable of horses in the early 18th century. A pack of hounds known as the Sonna Harriers were owned by a Mr. Henry Tuite in Coolnahay and the Tuite hunting circuit included Lough Owel, Ballynacargy and Sonna. His son Hugh Morgan Tuite served as MP for the county of Westmeath between the 1820s and 1840s and continued the tradition. Sam Reynell of Killynon was involved in the specialized breeding of hunting hounds at Clonderlever and Archerstown leading to the establishment of the Westmeath Foxhounds in 1835.

During the Great Irish Potato Famine in the 1840s, the contrast between the lives of the Anglo-Irish Protestant landed gentry and Gaelic Catholic tenant farmers was stark. While the rich and wealthy lived in luxurious country mansions and could indulge in feasting, sport and leisure, their tenants lived in wretched poverty and in danger of starvation.

The deaths of a million of the Gaelic Irish during the disaster and the emigration of millions more in the latter half of the 19th century led to bitter resentment, violent subversion and land agitation against the landlord elite. Ladies and gentlemen on horseback pursuing foxes with their packs of hounds became a symbol of British oppression of the Irish peasantry in the eyes of many Irish nationalists.

The first Master of the Westmeath Hunt was Sir Richard Levinge who erected kennels in the stable yard at Knockdrin Castle . The opening meeting of the hounds took place on the 1st November 1854 at Ballynegall then the residence of J. W. Middleton Berry , followed by a meeting at Rosmead the residence of Lord Vaux of Harrowden . This was followed by a further meeting in 1855 at Clonhugh House home of Col Fulke Greville M.P. In 1856 George Augustus Rochfort Boyd of Middleton Park became Master of the Hunt, a position he held until 1858 when John Fetherstonhaugh Briscoe of Grangemore, Killucan replaced him as Master until 1860.

Mr. Gerald Richard Dease of Turbotston House , became Master in 1861 agreeing to take a loan of the hounds under certain conditions from his predecessor. (This agreement formed the basis on which the pack of hounds would transfer from one Master of the Hunt to the next.)

Mr Dease spent seven seasons as Master (1861-1868) and during that period it was decided to build county kennels at Culleen (sometimes called Cullion) and in 1866, some Ł330 was raised by subscription for this purpose. Mr C.MacDonald Moreton took over Mastership of the Hunt between 1868-1871. On the opening day of the Season in 1871-2 Captain Richard Coote was appointed Master, he had previously hunted harriers in his native County Cavan . He remained Master until 1872 when he was replaced by Capt Reginald Greville-Nugent who lived at Clonhugh.

Reginald Greville Nugent who lived at Clonhugh was more renowned as a steeplechase jockey who spent a lot more time at race meetings in the United Kingdom than as a huntsman.In 1874 he resigned to concentrate full-time on steeplechasing. In 1875 the Hunt subscription amounted to Ł1,154 and there were 105 members. Sir Montague Chapman son of Sir Benjamin Chapman the 4th Bart. of Killua Castle near Delvin became Master in 1876 and held the position until 1881.

Mr Montague Chapman was responsible for starting the first Point-to-Point races in Westmeath. The first recorded Point –to Point was held at Loughegar in 1875. During the 1878-79 season a number of distinguished English visitors joined in the hunting among them the Duke of Marlborough then Lord Lieutenant of Ireland who stayed at Knockdrin Castle and Lord and Lady Randolph Churchill.   Captain James Towers-Clark an officer in the 1st Royals Regiment became Master of the Hunt in 1883 and held the position until 1886. He was a good huntsman who built up the county pack during his time as Master.

It was during Lord Greville's tenure that a by-law was put on the statute books of the Hunt in 1887 which stated that "The name of a proposed new member be submitted through the Hon. Sec to the Committee on being proposed by a member of the Hunt; that the Committee may; if they think necessary call a general meeting and submit the name for admission". The minimum membership subscription at that time was Ł5.

However in November of the same year at the instigation of Lord Greville "farmer" members were admitted on payment of a yearly subscription of two guineas. This was the first resolution of its kind ever passed in an old established Hunt and brought about a material change in the Hunt as a club for the landed gentry only.

Upon the resignation of Lord Greville in 1893 he was succeeded by the Earl of Longford a subaltern in the 2nd Life Guards and his brother the Hon. Edward Michael Pakenham a Captain in the Coldstream Guards. Lord Longford succeeded to the title and estates in 1887 on the death of his father the fourth Earl. Mr Pakenham inherited Cookesborough from Mr Adolphus Cooke whose property adjoined Lord Longford's in North Westmeath .

Mr Frank Barbour was Master between 1908 –1912, he was succeeded by an American Mr Harry Worcester Smith of Worcester Massachusetts . He brought his own pack of hounds called the Grafton Hounds from the United States , and following a nine month quarantine period he set about hunting the countryside.

Mr E .W. Hope – Johnstone was Master from 1913-1924. Apart from Lt. Col. Denis Purdon and his brother Lt. Col. Purdon–Winter who shared the Mastership for twenty nine years between 1927 and 1966 most other Masters of the Hunt during the 20th Century only held the position for short periods of time. In the 20th century the sport was no longer the preserve of an elite but included all classes of Irish society.

In the late 20th century and early 21st century, public opposition to blood-sports in Britain and Ireland  grew and animal rights activists sought to prohibit them provoking bitter opposition from hunting enthusiasts. Foxhunting was banned in 2002 in Britain but remained legal in Northern Ireland and the Republic of Ireland .

Previous - Cogan: The Diocese of Meath
Next - The Grand Juries of the County of Westmeath