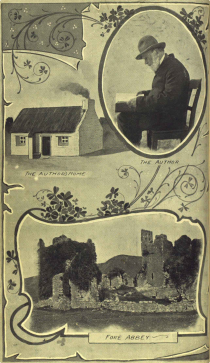 Images of the author, the author's home and Fore Abbey, taken from Woods' Annals of Westmeath: Ancient and Modern.

Images of the author, the author's home and Fore Abbey, taken from Woods' Annals of Westmeath: Ancient and Modern.

James Woods (1838-1916) was a native of Mullingar. We know very little of his early life but he probably attended the local National School . As a young boy he was apprenticed to a house-painter and he carried on in this trade for much of his life.

It is probably true to say that James Woods was largely self-taught, and was obviously an avid reader as he was appointed as librarian by the Catholic Young Men’s Society in Mullingar. He probably advanced himself through this position and through his friendship with his contemporary, James Tuite, who was involved with the Royal Society of Antiquaries of Ireland.

James Woods moved to Ballymore, almost midway between Mullingar and Athlone, in 1874. When The Westmeath Independent was founded in 1881, James Woods became the Ballymore and Ballymahon correspondent. He also contributed articles on local history to that paper.

In 1890 he published ‘Ancient and modern sketches of the County of Westmeath , historical, traditional and legendary’ in two volumes. These two volumes were based on his series called ‘Local Sketches’, which he contributed to The Westmeath Examiner.

The use of the word ‘annals’ in the title ‘The Annals of Westmeath’ may be slightly misleading. James Woods’ book was the first published history of the county. It was a remarkable compilation given the resources available locally at that time. The book was published on the strength of local fundraising by those who had read and admired his contribution to the local newspaper over many years.

Such was the popularity of ‘The Annals’ that it was re-published by a local committee in 1977. It is still the only published county history for Westmeath and, as such, is a much sought after and treasured volume. Research in many parishes, towns and villages has resulted in the publication of many monographs on particular areas of Westmeath, but few if any have ever been brought to fruition without reference to the legacy of James Woods.

Previous - The Grand Juries of the County of Westmeath
Next - Wexford