Taylor: A History of the Rise, Progress and Suppression of the Rebellion in the County of Wexford in the Year 1798 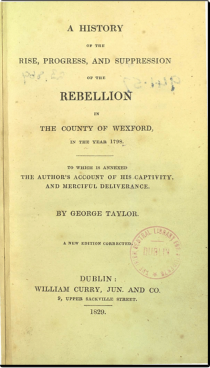 A History of the Rise, Progress and Suppression of the Rebellion in the County of Wexford in the Year 1798 by George Taylor was published in 1829 over three decades after the events described. Taylor, a Protestant and a loyalist, was held captive and was lucky to escape with his life after mostly Catholic Irish revolutionaries inspired by the American and French revolutions captured much of County Wexford during the summer of 1798.

Taylor describes the litany of historical injustices that led to the rebellion, the initial successes of the rebels who captured Wexford and other towns in the county, the final rebel defeat at Vinegar Hill and its aftermath. He vividly describes a descent into lawlessness and terrifying scenes of  fighting accompanied by sectarian reprisals and atrocities on both sides. The uprising precipitated the Act of Union 1800 which would have enormous ramification for Ireland in the 19th and 20th centuries.

In the late 12th century Ireland was conquered by the Normans. For centuries thereafter the Gaelic Irish would repeatedly rebel against English domination. After the Protestant Reformation in Britain, the ethnic and territorial conflict also became sectarian as the majority of the Gaelic Irish and the 'Old English' descendants of the Normans refused to renounce their Roman Catholicism.

In the 16th and 17th centuries repeated religious wars, Gaelic Irish defeats and the arrival of waves of Protestant settlers in Ireland encouraged by successive British monarchs resulted in a Protestant Ascendancy and a Gaelic Irish Catholic underclass of impoverished tenant farmers and landless peasants. Until the late 18th century when they began to be repealed, Catholics were oppressed by a series of draconian penal laws designed to discriminate against them religiously, politically and economically. Protestants in Ireland and Britain remained wary of historical Spanish and French support for Catholic Irish rebellion.

In 1783 American colonists secured the independence of the United States of America after defeating the British at Yorktown. In 1789 French radicals led a popular overthrow of the French monarchy followed by the execution of King Louis XVI in 1793. Whigs in the British House of Commons and the Irish Parliament sympathised with their revolutionary ideals and sought greater middle class freedoms. Henry Grattan and his supporters sought and achieved legislative freedom for the Irish Parliament after a militia known as the Irish Volunteers ostensibly established to combat a French invasion alarmed Tories who feared open Anglo-Irish Protestant rebellion in Ireland. The British government believed that Ireland was its weak flank and the most likely approach for a possible French invasion of the British Isles taking advantage of a simultaneous Irish uprising.

The Irish Parliament, despite its new powers, remained undemocratic dominated as it was by the Protestant Ascendancy. Radicals who formed the Society of the United Irishmen in Belfast, such as Theobold Wolfe Tone, Lord Edward Fitzgerald and many more, sought the overthrow of British rule in Ireland and the establishment of an Irish Republic with equality for Protestant, Catholic and dissenter. In 1796 Tone accompanied a French invasion fleet which was forced to turn back after storms prevented a landing in Bantry Bay, Co. Cork.

The Irish government responded to the threat with a brutal crackdown on rebels and their sympathisers throughout much of Leinster. Loyalist yeomanry arrested, tortured, executed and in many cases murdered suspected rebels while destroying and burning property of rich and poor alike. These tactics succeeded in destroying much of the rebel organisation and encouraged handover of large quantities of weapons. Meanwhile leading United Irishmen were captured with the help of spies including Lord Edward Fitzgerald who was mortally wounded while resisting arrest. In Antrim and Down, a Protestant rebellion led by Henry Joy McCracken and others was crushed with heavy loss of life.

News of a loyalist massacre of rebel prisoners in Dunlavin and Carnew appeared to support rumours of a planned extermination of the Catholic population. Rebels and their sympathizers who were wavering or planning to abandon rebellion altogether were spurred into action by radicals and extremists. In late May 1798 rebels massed and overcame loyalist garrisons throughout County Wexford especially in battles at Oulart, Enniscorthy and Wexford. Throughout the month of June, a civilian republican government was in control of much of County Wexford under the leadership of Father John Murphy, Bagenal Harvey, Matthew Keogh and others.

The rebels attempted to expand the area under their control by marching west toward New Ross and north toward Arklow but both forces were crushed with heavy losses. General Lake who commanded 20,000 troops incuding British reinforcements rushed to Ireland, launched a successful counter offensive against Wexford from the direction of Duncannon, New Ross, Newtownbarry, Carnew and Arklow simultaneously.

The rebels, the majority peasants armed with pikes, were no match for professional soldiers armed with muskets and supported by cannon fire. The rebel retreated on all fronts and their camp at Vinegar Hill was destroyed and organised resistance ceased. Captured rebels were given no quarter and thousands were killed after the defeat while others dispersed into the bogs and mountains. Father Murphy, Harvey, Keogh and other leaders were executed. As the rebellion collapsed sectarian reprisals resulted in the massacre of loyalist and Protestant prisoners including women and children. In a notorious incident rebels forced their captives into a barn and burned them to death while other loyalist prisoners were piked to death on a bridge in the centre of Wexford town.

Later between August and September, there was a short lived 'Republic of Connaught' after French troops landed in County Mayo too late to help the rebels in Wexford and Ulster. The French commander surrendered after his combined French and Irish force was defeated a Ballinamuck, County Longford. Wolfe Tone was captured at sea and taken to Dublin where he committed suicide after his request to be executed by firing squad was denied.

In the aftermath of the rebellion, the Irish Parliament agreed to merge with the British Commons under the Act of Union 1800. An abortive rebellion by Robert Emmet in 1803 was easily defeated and rebels still holding out in remote areas were eventually defeated. In 1815 the French were finally defeated at the Battle of Waterloo. Catholic Emancipation would not be achieved until 1829, the same year George Taylor's account of the rebellion was published, but conditions for the Catholic poor worsened culminating in the Great Irish Potato Famine of the 1840s. The 1798 rebellion would inspire generations of republican rebels throughout the remainder of the 19th century and into the early 20th century. However the secular principles and Protestant origins of Irish republicanism would often be overlooked by Irish nationalists.

Previous - Simington: The Civil Survey 1654-56: County of Wexford
Next - Wicklow