Maguire: A History of the Diocese of Raphoe 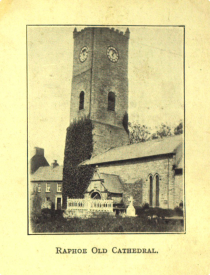 Canon Maguire's A History Of The Diocese of Raphoe was published in two volumes in 1920. Established in early Christian times by the successors of St. Patrick, patron saint of Ireland , the diocese of Raphoe roughly shared the same borders as the ancient Kingdom of Tyrconnell and much of what later became County Donegal . The large detailed work tells the history of how the Christian church interwove itself into the fabric of Irish society and politics over the centuries.

The most northern portion, the Inishowen peninsula was forcibly incorporated into the diocese of Derry in 1266 by Bishop Germanus. Following the Protestant Reformation the Catholic Church competed with the Church of Ireland Diocese of Raphoe and Derry , after the two diocese were amalgamated in 1834. The two Catholic dioceses of Derry and Raphoe remained separate.

The English Church broke with Rome over the divorce of Catherine of Aragon by King Henry VIII and his marriage to Anne Boleyn in the 16th century. The Gaelic Irish in the diocese of Raphoe had already been fighting Norman rule in Ireland since the 12th century and the cause of Catholicism and Irish nationalism became fused together. There were a succession of wars in Ireland between the 16th century and the late 17th century between the Gaelic Irish and British Protestant settlers.

Over the centuries the Catholic Church and the Catholic Gaelic Irish suffered centuries of often brutal persecution until the beginning of the repeal of the Penal Laws in the late 18th century. The forced payment of tithes to the Church of Ireland by the Catholic population was violently resisted in the 1830s and finally abolished in 1869. Catholic Emancipation was eventually won in 1829 by Daniel O'Connell who was known as 'The Liberator.' In the 1830s a program of building parish churches was begun in Raphoe following the same pattern as dioceses across Ireland .

The Great Irish Potato Famine devastated the Catholic population of the diocese of Raphoe. Prior to the catastrophe the majority were already poor and were heavily dependent on the blight susceptible potato crop. Starvation, disease and mass emigration left many areas of the diocese depopulated.

Irish dioceses including Raphoe often supplied the only social services to the mostly poor population. Schools, hospitals and charities run by the Church provided for the needy. This would continue well into the 20th century as Irish independence followed 1922.

By the late 19th century a highly organised broad Irish nationalist political movement led by Charles Stuart Parnell secured the rights of Irish tenants. The Catholic bishops of Raphoe played a major role in organising the Irish Catholic population at local level and supported the peaceful democratic path to Home Rule while opposing the violent republicanism of the Fenians.

Maguire's work is dedicated to Dr. Patrick Joseph Cardinal O'Donnell, who served as Bishop of Raphoe from 1888-1922. O'Donnell later served as coadjutor archbishop of Armagh and succeeded to the bishopric in 1924. He was created a cardinal in 1925 and died in 1927. O'Donnell who claimed descent from the ancient O'Donnell clan was a staunch advocate for social justice and was a member of the Committee of the Irish Agricultural Organisation Society.

Previous - Eucharistic Congress Souvenir and Record from 1932
Next - Monahan: Records relating to the Dioceses of Ardagh and Clonmacnoise