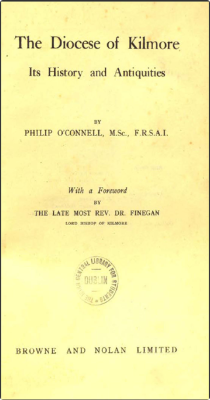 Phillip O'Connell's The Diocese of Kilmore: Its History and Antiquities tells the story of the diocese from the coming of St. Patrick to Ireland in the 5th century until the early 20th century.The diocese of Kilmore encompasses most of County Cavan and parts of counties Leitrim, Fermanagh, Meath and Sligo and straddles the border between the Republic of Ireland and Northern Ireland. It is one of eight suffragan diocese which fall under the Archdiocese of Armagh, the most senior primatial see in Ireland .

The diocese was formerly known as Triburnia or Tybruinensis because it once owned by King Brian of Connaught and was formally established in 1152. The territory was more or less interchangeable with what became known as the Kingdom of Briefne, the lands of the rival O'Rourke and O'Reilly Gaelic clans. St. Felim established a church at Kilmore south of present day Cavan Town. In the mid 15th century Bishop Aindrias Mac Brádaigh received permission from Pope Nicholas V to transform it into the cathedral of his diocese.

Following the English reformation, the Catholic diocese was stripped of its cathedral, properties and possessions. Monasteries were dissolved and their wealth confiscated and over the centuries that followed Catholics who did not convert to the Protestant faith faced brutal persecution. In the early 17th century Protestant settlers from Scotland and England began colonised much of Ulster displacing the native Irish.

Catholicism remained the dominant religion of the native Gaelic Irish and what had been an ethnic conflict with British settlers now became a religious one too. A series of sectarian and nationalist rebellions and wars followed and ravaged much of Ireland between the 16th and 17th centuries culminating in the Protestant victory at the Battle of Boyne in 1690.

The Gaelic Irish families disappeared into obscurity as they were replaced by an Anglo-Irish landowning elite. The majority of the Gaelic Irish population who lived in wretched poverty as tenants on their own land clung stubbornly to their Roman Catholic faith. The established Anglican church demanded that all regardless of religion should pay tithes. This discrimination was bitterly resented by both Catholics and Presbyterians alike.

Finally in the late 18th century the Penal Laws persecuting Catholics were gradually relaxed and an increasingly confident Catholic Church began to emerge. Bishop Denis Maguire (1770–98) was involved in a church building program as restrictions on Catholic worship were lifted. Bishop James Browne (1827–65) founded the diocesan college in 1839. The diocese was ravaged by the Great Famine which saw a million die from starvation and disease across the country. In the 19th century, the issues of Catholic Emancipation, land reform and the Home Rule movement meant that the Catholic Church was intimately involved in politics. An eviction witnessed by a local Catholic priest was the basis for the ballad "By Lough Sheelin Side."

O'Connell's book is dedicated to Bishop Patrick Finegan (1910–1937) who served during a profound period of violent transition from direct British rule to Irish political independence. The Irish Catholic Church opposed violent republicanism and favoured peaceful democratic politics during the period of 1916-1923 when Ireland was convulsed by the War of Independence and a bitter Civil War. The threat of all out civil war with the Unionist Protestant population of what became the six counties of Northern Ireland was only narrowly avoided.

Following independence from Britain the burden of providing schooling, hospitals and other vital social services in the new Irish Free State fell upon the shoulders of clergy such as Bishop Finegan. At the same time Bishop Finegan was involved in fund raising for the Cathedral of Saints Patrick & Felim. He was to die the year before construction began. In the decades that followed the Roman Catholic Diocese of Kilmore played a leading role in all aspects the lives of its people.

Previous - Monahan: Records relating to the Dioceses of Ardagh and Clonmacnoise
Next - Walsh: Fingal and its Churches