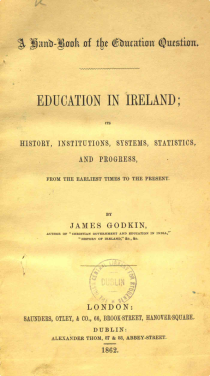 Title page of Godkin's 1862 book on Education in Ireland.

Title page of Godkin's 1862 book on Education in Ireland.

James Godkin (1806–79), born in Gorey, Co. Wexford, was an Irish author and journalist. He had a strong interest in religion and religious matters. While it has been suggested that he may have formerly being a Catholic, in 1934 he became a minister of the Congregational Church, Armagh. In 1938 he founded the Christian Patriot, a weekly newspaper, in Belfast. While the publication covered national and international affairs, its true aim was the reconciliation of catholic and protestant.

His involvement in political protest led him to write his prize-winning essay “The Rights of Ireland” exploring the possibility of re-establishing an independent Irish parliament. The essay was published as part of the collection Essays on the Repeal of the Union (1845) by James Duffy.

In 1848 he formally left the ministry, becoming editor of the Dublin Daily Express as well as the Dublin correspondent for the London Times.

In 1850 he was active on behalf of the Tenant League, becoming increasingly interested in the land question. In 1869 he travelled widely in Ulster and the south of Ireland, making observations and testing public opinion on the system of landholding in different parts of the country.

Godkin’s writings on ecclesiastical and land questions were widely read and influential. With the publication of The Land-war in Ireland (1870) Godkin put forward the view that the way to resolve the unrest lay in the implementation of Gladstone's land bill.

A Handbook of the Education Question: Education in Ireland; its history, institutions, systems, statistics, and progress, from the earliest times to the present was published in 1862. It traces a history of education in Ireland from ancient to modern times. It also provides important details regarding the educational institutions and structures in place during this period of Irish history, including information on schools, universities and boards of education.