Newman: The Idea of a University

John Henry Newman (1801-1890) was born in London. At the age of fifteen, he enrolled in Trinity College, beginning an association with Oxford University that would last for nearly thirty years. He moved to Oriel College in 1820 after receiving his bachelor’s degree, becoming a fellow in 1822 and a tutor in 1826. Following a disagreement on the responsibilities of the college tutor with the new provost of Oriel, Edward Hawkins, Newman was forced to resign in 1832 as Hawkins had cut off his supply of new students. 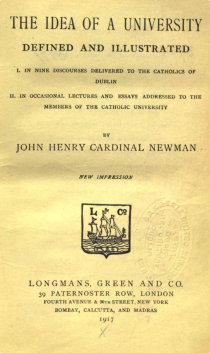 Title page of The Idea of a University by Newman, 1917

Title page of The Idea of a University by Newman, 1917

Newman’s work in Oxford did not end with his resignation however and he went on to hold academic and pastoral roles concurrently for several years, first at St. Clement’s and then St. Mary’s. In 1843, Newman decided to become a Roman Catholic and was ordained to the priesthood in 1846.

He began his work with the Church and wrote continuously. Some of the major publications of his Catholic years were Parochial and Plain Sermons (1868), a new edition of his Anglican discourses, The Idea of University (1852) and his Apologia Pro Vita Sua (1864) is considered a classic among religious autobiographies.

The Idea of a University is a collection of the inaugural lectures for the Catholic University and other academic essays. John Henry Newman delivered these lectures 150 years ago, when he assumed the position of first rector of the newly founded Catholic University in Ireland. These messages form a systematic, sound treatment of what a true education entails, with insights on the purposes and advantages of a university education.

Newman warns against the overreaching of scientific fields and the triumph of smug materialism and positivism. He is also careful to point out that the liberal arts and even theology may attempt to establish a single, inadequate framework for the discovery of truth.

Special recognition for Newman’s work as both an Anglican and a Roman Catholic came in the late 1870s. He was the first person elected to an honorary fellowship of Trinity College in 1877 and in 1879, Pope Leo XIII awarded him a place in the College of Cardinals.

On 11th August 1890, he died of pneumonia aged 89 and was buried in Warwickshire. His epitaph reads, "Ex umbris et imaginibus in veritatem"--"out of shadows and pictures into truth."