Ferguson: Lays Of The Red Branch 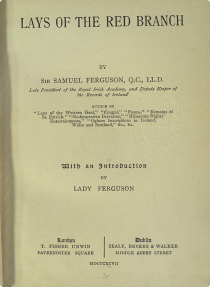 Among the stories are those of Cúchulainn, the boy warrior, a skilled hurling player who slays a vicious hound by firing a sliother or hurling ball into his mouth. Cúchulainn also fights the warriors sent by Maeve, Queen of Connaught, to Ulster to steal the Brown Bull of Cooley, using just his sling.

Meanwhile the heroine Deirdre, is betrothed to the King of Ulster but flees with her lover Naoise to Scotland. However the cruel King tracks them down, kills Naoise and captures Deirdre. The King plots an evil punishment by marrying her to the man she hates the most, the warrior who slew Naoise. In despair she commits suicide, leaping from the king’s chariot, dashing her head against a rock, rather than submit to a forced marriage to the man who killed her lover.

Sir Samuel Ferguson (1810-1886) was a Belfast born Ulster-Scots Irish poet, antiquarian, artist, barrister and public servant. His family originated in Scotland and came to Ireland in the 17th century. As a child his mother read Shakespeare and other English poetry and literature to her six children. His father squandered the family fortune and young Ferguson was forced to find work as a writer to make ends during his education firstly at Belfast Academy, then at the Belfast Academical Institution and finally Trinity College, Dublin.

Ferguson was called to the bar in 1938 but continued his writing career with articles published in literary magazines such as Blackwood’s Magazine and Dublin University Magazine. Ferguson practised his legal career in Dublin. He was sympathetic to Irish nationalism and defended the Young Irelander rebel Richard Dalton Williams.

In the 1840’s Ferguson travelled widely in Europe , visiting archaeological sites, museums and libraries. He married Ann Guinness, a member of the wealthy Guinness brewing dynasty in 1848. Ferguson also wrote for antiquarian journals becoming an expert on Irish topics through his travels and studies. One of his most important works was Ogham Inscriptions in Ireland, Wales and Scotland published after his death.

Ferguson also won awards for his poetry from Trinity College in the 1860’s, writing his works in both Irish and English. His contributions to Irish literature would inspire W. B. Years and others who made up the so-called 'Celtic Revival.' He eventually retired from legal practise to become Keeper Of The Public Records in Ireland, a service for which he was knighted in 1878. Sadly the repository was destroyed during the Irish Civil War of 1922-23. He also served as President of the Royal Irish Academy, an organisation for the advancement of antiquarian studies. A collected volume of his poems was published in the 1880s. He died at Howth, Dublin in 1887.

Previous - Croker: Fairy Legends and Traditions of the South of Ireland
Next - Gregory: Gods And Fighting Men