Gregory: A Book Of Saints And Wonders 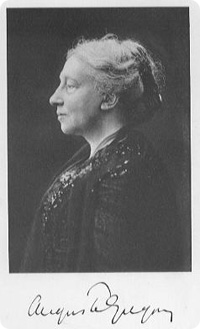 A Book Of Saints And Wonders by Lady Augusta Gregory is subdivided into a number of books describing the lives of the Irish saints. Among the stories include St. Patrick’s adventures as he travels Ireland converting the pagan Irish to Christianity and the voyages of Brendan The Navigator who sails into the unknown Atlantic. Another book describes the voyage of Meldune, a story about a wandering warrior seeking revenge for the death of his father who gets involved in many adventures along the way. The collection of tales and myths draws from old Irish writings and the folk memory of the Irish peasantry.

Lady Augusta Gregory (nee Persse) (1852-1932) playwright, author and patron of the arts was born into wealthy Anglo-Irish privilege at Roxbourough House, County Galway . Her father was twice married with sixteen children. Her childhood nurse was Mary Sheridan who exposed her to Irish folklore contributing to her adult conversion to Irish cultural nationalism. As a home educated child she wanted to learn Gaelic but was forbidden.

In 1879 her family holidayed in France and in 1880 at 28, she married the elderly Sir William Gregory who lived in nearby Coole Park which hosted literary figures such as Robert Browning, Lord Tennyson and Henry James. During their marriage, the couple travelled the world. A son, Robert, was born in 1881 and Sir William died in 1892.

In the 1890’s Lady Gregory befriended the poet W.B. Yeats and Douglas Hyde, joining his Gaelic League, an Irish nationalist movement seeking to revive Irish culture, and finally learned Gaelic. Gregory, Yeats and Edward Martyn set up the Irish Dramatic Society and the Irish National Theatre Society before founding the Abbey Theatre which opened in 1904. Gregory wrote and directed many plays and encouraged Irish actors and playwrights. The company toured Ireland and the world.

There was controversy in 1907 when J. M. Synge’s Playboy Of The Western World sparked a riot because of its unfavourable portrayal of the Irish. A wealthy patron dissociated herself from the Abbey when a performance was held on the day King Edward VII died. George Bernard Shaw’s play The Shewing up of Blanco Posnet, banned by the censor, was nonetheless staged in the Abbey, earning Lady Gregory the playwright’s friendship.

Hugh Lane, Lady Gregory’s nephew, perished in the German sinking of the Lusitania in 1915. Lady Gregory fought an unsuccessful battle to have his art collection returned to Ireland. Her son Robert died fighting in Italy in 1916.

During the Anglo-Irish War, Lady Gregory took the republican side but was not politically active, fearing British reprisal. Roxbourough House was burned in the Irish Civil War. In the 1920’s Gregory supported the playwright Sean O‘Casey but his play The Silver Tassie was rejected by the Abbey. By the late 1920’s Lady Gregory’s health declined. She retired to Galway where she died in May 1932.

Previous - Kennedy: Legendary Fictions of the Irish Celts
Next - O'Grady: The Coming of Cuculain