O'Grady: The Coming of Cuculain 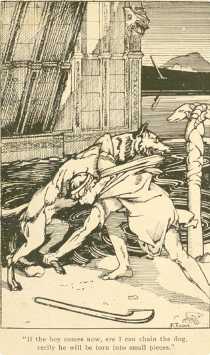 The boy warrior Setanta kills the hound of Culain, a fierce guard dog, in self-defence and later offers to take its place until a replacement is reared. Later the boy warrior single-handedly defeats the army of Connaught.

The boy warrior Setanta kills the hound of Culain, a fierce guard dog, in self-defence and later offers to take its place until a replacement is reared. Later the boy warrior single-handedly defeats the army of Connaught.

The Coming of Cuculain by the Irish author, journalist and historian Standish O'Grady (1846-1928) is a modern retelling of the exploits of the legendary hero Cuculain from the Ulster cycle of ancient Gaelic mythology.

The introduction by 'GE' or George Russell praises the work as doing justice to an Irish mythological hero who is the equal of Hector, Achilles and Ulysses of Greek myth or Rama and Yudhisthira of Hindu legend.

Cuculainn is a demi-god, the son of the Celtic god Lug, one of the Tuatha De Danaan and Dectera, a female warrior and the sister and charioteer of Conchobar Mac Nessa, King of Ulster. He is raised by Dectera and his mortal father Súaltam and is taught the virtues of justice and wisdom.

Setanta grows up to become a handsome and fearless youth who undergoes a ríastrad or monstrous transformation when he is enraged. He learns to control this superhuman ability by having his charioteer make him angry before he battles his enemies.

Setanta's skills on the hurling field impress his uncle King Conchor Mac Nessa. He is invited to a feast by Culain, the high smith of Ulster. However the youth arrives late to the feast only to be confronted by a monstrous hound owned by Culain.

When the guard dog attacks him, Setanta kills the beast by firing his sliotar (hurling ball) down its throat using his camán (hurley). Culain is devastated so Setanta agrees to take the dog's place until it is replaced and earns the nickname Cuculain or 'Hound of Culain.'

O'Grady's book finishes when Cuculain reaches the age of 17 but there are many other legends about his adventures in the Ulster Cycle.

In other verions of the legends Cuculain has many lovers. The men of Ulster are believed to have been afraid Cuculain would steal their wives so they persuade him to marry Emer. Emer is driven into a jealous rage when Cuculain falls in love with Fand, the wife of Manannán mac Lir, the god of the sea. Emer plans to kill Fand but is moved by the depth of their love. Both Cuculain and Emer compromise by drinking a magic potion that wipes away the memory of his infidelity.

The most well-known story of Cuculain is the Cattle Raid of Cooley. Queen Maeve, the Queen of Connaught, launches an attack on Ulster in order to steal the Brown Bull of Cooley however Cuculain defeats the men of Connaught single handedly. It is during the war that he is forced to kill his friend Ferdiad. Later Cuculain is tricked into eating dog meat which weakens his power and makes him vulnerable. An enemy fashions three magical spears to kill his charioteer, his horse and finally to mortally wound Cuculain. Before he dies, Cuculain lashes himself to a standing stone and his enemies only approach him when a raven lands on his shoulder.

Standish O'Grady was born in 1846 in County Cork, the son of a Protestant clergyman. He went on to study at Trinity College Dublin where he became interested in Gaelic mythology and Irish history. Although educated as a lawyer and working as a newspaper journalist, he devoted himself to writing a series of literary works based on Irish legends. His published works include Finn and his Companions (1891), The Coming of Cuculain (1894), The Chain of Gold (1895), Ulrick the Ready (1896), The Flight of the Eagle (1897) and The Departure of Dermot (1913).

The writings of Standish O'Grady and others of the 19th century Gaelic revival literary movement inspired young Irish republicans who made Cuculain their cult figure during the Irish revolutionary period  of 1916 to 1923. The legend of Setanta's hurling skills was also used by the Gaelic Athletic Association to promote the field game to Irish young people.

O'Grady married and had three children, making his living by writing for the Daily Express, The Kilkenny Moderator and the Cork Free Press and other publications. In later life he lived with his eldest son, a clergyman in England, and died on the Isle of Wight in 1928.

Previous - Gregory: A Book Of Saints And Wonders
Next - Wilde: Ancient Cures, Charms and Usages of Ireland