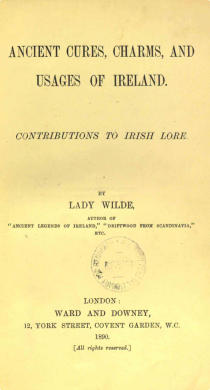 Ancient Cures, Charms and Usages of Ireland relays the use of herbs and charms as cures for people with illnesses, when there was still a firm belief in the supernatural influences in the art of healing.

This volume is a significant contribution to the collection of Irish folklore, as information was gathered and compiled at a time when knowledge of ‘mystic medicine’ was rapidly disappearing.

Previous - O'Grady: The Coming of Cuculain
Next - Wilde: Ancient Legends, Mystic Charms and Superstitions of Ireland