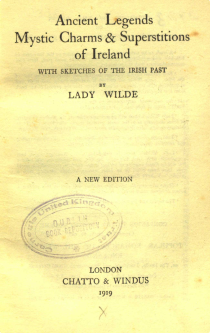 The Ancient Legends of Ireland was first published in 1888. When writing this book, she used much of her husband’s research material for his book Irish Popular Superstitions. The final chapter of Ancient Legends of Ireland, “The Ancient Races of Ireland” is entirely written by Sir William Wilde. The book tells the folk stories and legends of Ireland, including those surrounding the fairies, holy wells, animals, festivals and many more. They were collected from people around the country, and many were believed to be true at the time Lady Wilde gathered them together in this volume.
Ý