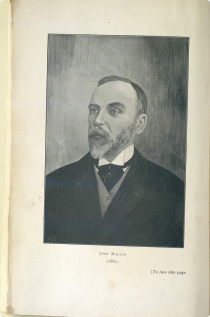 Irish Conspiracies: Recollections of John Mallon edited by F.M. Bussy, published 1910, is a biographical account of the colorful police career of Superintendent John Mallon (born 1839) of the Dublin Metropolitan Police. Shrewdly intelligent, Mallon, was a Catholic from Co. Armagh. Mallon’s ‘G’ division was a unit of plainclothes detectives who were often tasked with spying, recruitment of informers, prevention of political violence and apprehension of Irish republican political subversives in the 19th century.

The book gives an exciting and detailed account of how secretive Irish republican revolutionary groups such as the Fenians and The Irish National Invincibles were regularly infiltrated by Mallon’s detectives. Many of these Irish radicals drifted between Ireland, Britain and America. Their activities included spying, fundraising, smuggling weapons and explosives, plotting outrages and taking part in political agitation. Extremists secretly infiltrated a range of mainstream social and political organizations.

These activities occurred in the context of poverty and starvation among the majority of the Irish Catholic population. Meanwhile the Land League and the Irish Parliamentary Party campaigned for land reform and self-government in Ireland . The Anglo-Irish Protestant landowning class who dominated the social, political and economic life of the island sought to maintain their privileged position. Mallon's role was to prevent the outbreak of civil disorder and violence.

In 1882, Lord Fredrick Cavendish, the new Chief Secretary of Ireland and Thomas Henry Burke, Permanent Undersecretary, were both stabbed to death in the Phoenix Park , Dublin . A group of Irish extremists calling themselves ‘The Irish National Invincibles’ claimed responsibility. Superintendent Mallon had many suspects arrested and persuaded leading republicans to betray their comrades. Five men were hanged as a result of their testimony. James Carey, one of the informers, was later murdered in revenge during a voyage to South Africa .

The incident was politically damaging to Charles Stuart Parnell MP, the Irish nationalist leader in the British House of Commons. Lord Harrington, a relative of the late Lord Cavendish, defected from Prime Minister Gladstone’s Liberal Party and allied with unionist and conservative opponents of Home Rule. As a consequence the passage of Home Rule legislation was delayed until 1914 but never implemented.

During the Irish War Of Independence 1919-21 many of the ‘G men’ of the DMP were shot dead by the IRA on the orders of Michael Collins. In 1925, the DMP merged with the Garda Síochána and the duties of the ‘G’ division were taken over by the Garda Special Branch, many of whom ironically had been IRA members.

Previous - Burton: The History of the Kingdom of Ireland
Next - Cody: The Insurrection of Twenty-Third July, 1803