Mitchell: The History of Ireland

John Mitchel was born in Camnish, near Dungiven, Co. Derry in 1815. He was a graduate of Trinity College Dublin, and went on to become a lawyer and one of the most influential, controversial journalists of the nineteenth century. He was also an Irish nationalist activist. 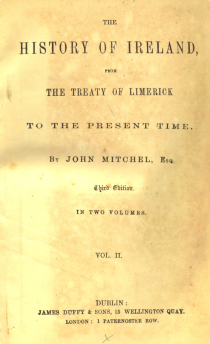 Mitchel became a leading contributor to The Nation newspaper in Dublin and founded the United Irishman in 1848. He incited peasants to withhold rents so they could survive the famine, but was arrested on charges of treason for his rebellious articles in May 1848. Found guilty, he was sentenced to be transported to Australia for fourteen years and would not see Ireland again for 27 years. His portrayal of the famine as deliberate genocide became central to the nationalist orthodoxy, and his disdain for parliamentary politics did much to inspire those who would overthrow this rule in Ireland.

He escaped from Van Dieman's Land (Tasmania) to America in 1853 and started a proslavery journal, The Citizen. This paper serialised his Jail Journal, a detailed account of his time on board the transportation ship and in Van Diemans Land. Later published as a book, this work is considered to be definitive. He returned to Ireland in 1874 when offered the opportunity to run for parliament over Tipperary, and although he was elected he was declared ineligible as an unreleased felon, even when subsequently re-elected in 1875. Eight days after receiving news of this victory, he died at his home at Dromolane, Newry, Co. Down on 20th March, 1875.

Mitchel’s The History of Ireland is printed in two volumes. Volume I is divided into 34 chapters, starting from the Treaty of Limerick and ending with the year 1798. Volume II consists of 28 chapters, beginning with the events on Vinegar Hill in the 1798 Rebellion and concluding with the years 1850-1851. Appendices include The Articles of Union, Original Red List, Original Black List, An Act for the Union of Great Britain and Ireland, and Proclamations found in Emmet’s Arm’s Depots.

Previous - Matthews: The O'Neills Of Ulster
Next - Musgrave: Memoirs of the Different Rebellions in Ireland