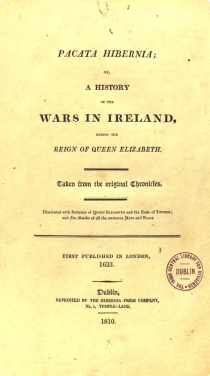 Stafford, Thomas. Pacata Hibernia: or, A History of the Wars in Ireland During the Reign of Queen Elizabeth, Dublin: Hibernia-Press Co., 1801.

Sir Thomas Stafford (1576?-1655) was a secretary to Sir George Carew, the 1st Earl of Totnes. Believed to be the illegitimate son of Carew, Stafford also served under him as a captain in Munster during the campaign against Hugh O’Neill. A large collection of manuscripts relating to Ireland were donated to Stafford by Carew at the time of the latter’s death. While this collection would have acted as a primary source for his work, it is stated by Stafford that he also drew on Carew’s own writings in composing his Pacata Hibernia.

Pacata Hibernia:, or A History of the Wars in Ireland During the Reign of Queen Elizabeth (originally titled Pacata Hibernia, Ireland appeased and reduced; or, an historie of the late warres of Ireland) was first published in London in 1633. It offers an impartial, contemporary account of affairs in Ireland during the latter stages of the Nine Years War, as well as details on the conduct of the campaign in Munster. The work also includes a series of accompanying maps. Irish historian Standish O’Grady characterises Pacata Hibernia as ‘the most famous of the Anglo-Irish historical classics’.

It is believed, though not verified, that Thomas Stafford is buried in Carew’s tomb at Stratford-on-Avon.