Collins: The Path to Freedom 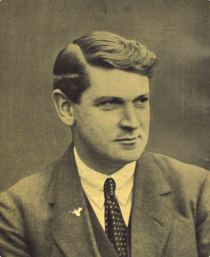 Photograph of Michael Collins, taken from The Path to Freedom.

Photograph of Michael Collins, taken from The Path to Freedom.

The Path to Freedom by Michael Collins (1890-1922) was published posthumously in 1922 and contains the Irish nationalist political and military leader's philosophy and vision for Ireland. Collins was a leading member of Sinn Fťin and the Irish Republican Army during the Irish War of Independence. Later he took part in the negotiation of the Anglo-Irish Treaty and was Chief of Staff of the National Army during the subsequent Irish Civil War until he was killed in an anti-Treaty IRA ambush in 1922.

Michael Collins was born in Clonakilty, Co. Cork in 1890 and inherited his father's Irish nationalist political outlook. He left school at 15 before travelling to London to work for the Royal Mail. In 1910, he began working for a firm of stockbrokers. At the same time Collins was a member of the Gaelic Athletic Association and was sworn into the Irish Republican Brotherhood. Later he worked in New York for a year before returning to Ireland in 1916.

The Government of Ireland Act 1914 was pushed through the British parliament by John Redmond MP but was shelved when World War I broke out in August. The Irish Volunteer movement split over the issue with the majority following Redmond who supported the war. A radical minority refused to participate while the IRB plotted rebellion including Thomas Clarke, Patrick Pearse and others.

Collins participated in the 1916 Easter Rising in Dublin at the rebel headquarters in the General Post Office. After a week of fighting the rebellion was crushed by the British military and the leaders were shot by firing squad. Collins was sent to a prison camp in Frognoch, Wales and immediately began plotting continued rebellion against British rule in Ireland with other survivors.

After most of the rebels were released by October 1917, Collins was on the executive of both the Irish Volunteers and Sinn Fťin, a nationalist party formerly led by Arthur Griffith that was taken over by radical republicans. Both organisations came under the leadership of Eamon De Valera, a leading 1916 rebel commander who had avoided execution. Collins and De Valera would become bitter rivals in the years ahead. Redmond's Irish Parliamentary Party was decimated in the 1918 British general election by a swing behind Sinn Fťin largely due to popular opposition to the introduction of conscription and the failed implemenation of Home Rule policy. Collins himself was elected MP for the Cork South.

DŠil Eireann, made up of mostly Sinn Fťin and other MPs met in January 1919. The Irish War of Independence, a guerrilla struggle against British rule began the same day and continued until 1921. Collins was now President of the IRB and Director of Intelligence of the Irish Republican Army, the name of the reconstituted Irish Volunteers. He was also Minister for Finance in the underground government led by Eamon De Valera.

Collins directed an assassination campaign against British political, civil, legal, military, police and intelligence officials. In rural Ireland, the IRA organised into local 'flying columns,' attacked the Royal Irish Constabulary and British Army. The RIC were soon reinforced by thousands of British ex-servicemen nicknamed 'Black and Tans' who acted brutally against Irish civilians. After Collins' assassins killed eleven British agents and two auxiliaries in Dublin on Sunday, November 21, 1920, the RIC killed fourteen civilians at Croke Park in reprisal. Hundreds of police, soldiers, civilians and rebels died in other violence throughout the country during the conflict. Collins evaded British arrest despite riding openly through Dublin on a bicycle.

In 1921 the British offered a truce in return for negotiations. Collins despite his misgivings was persuaded by De Valera to accompany a delegation to London. Collins, Griffth and others met with British Prime Minister Lloyd George and his senior cabinet ministers and it was agreed that twenty-six counties of Ireland would form the Irish Free State with dominion status rather than a fully independent all-Ireland republic. The remaining six counties would form a Unionist Protestant dominated autonomous state called Northern Ireland. Collins remarked that he had signed his own death warrant but also claimed that the Treaty gave Ireland 'the freedom to achieve freedom.'

The Free State quickly recaptured IRA strongholds in Dublin followed by other cities and major towns in Ireland and the IRA reverted to guerrilla warfare. Secretly Collins made arms supplied to he National Army by the British available to IRA units in Ulster after Catholics were attacked by Protestants. After Arthur Griffth died in August 1922, Collins assumed control of the government and travelled south seeking to negotiate terms with former comrades in County Cork. His convoy was ambushed at Bťal na mBlŠth near Bandon on August 22, 1922. Instead of speeding away in his touring car, Collins ordered his escort to return fire and in the ensuing gun battle he was the sole fatality, wounded in the head on the roadway as he fired his rifle at his attackers. His body was driven to Cork and transported by sea to Dublin. Collins lay in state at the Dublin City Hall before an estimated 500,000 people attended his funeral at the Pro Cathedral and his burial in Glasnevin cemetary.

Nonetheless William T. Cosgrave took control of the civilian government while Richard Mulcahy took over the leadership of the National Army and both men led the continued struggle against the Anti-Treaty forces. The Civil War ended in 1923 following the capture of thousands of republicans when the IRA leadership ordered their men to dump arms. William T Cosgrave's government would govern the country until 1932. However Eamon De Valera and his Fianna FŠil party made up of many IRA veterans became the dominant force in Irish politics after re-entering the DŠil in 1927. They were elected to government in 1932. Political rivalry between Fine Gael and Fianna FŠil parties dominated southern Ireland for decades. In 1949 the Irish Free State officially became the Republic of Ireland abd left the British Commonwealth. In Northern Ireland a Protestant Unionist majority ruled unchallenged until conflict†erupted in the late 1960s.

Collins was mourned as a 'lost leader' who many believed had the potential to alter the course of Irish history for the better. His fiancťe Kitty Kiernan later married Felix Cronin and named one of her sons Michael Collins Cronin. To his close friends and loyal comrades Collins was warm-hearted and generous. To his British and Irish enemies he was a ruthless and fiercely intelligent opponent.

Previous - Bryan: The Great Earl Of Kildare
Next - Davitt: Leaves from a Prison Diary