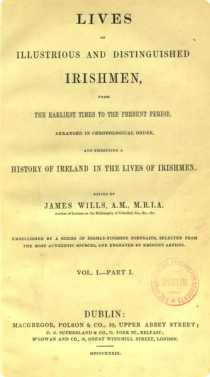 James Wills (1790-1868) was born in Willsgrove, Co. Roscommon, and was educated at Trinity College Dublin. He went on to study law in the Middle Temple, London. His wish was to pursue a legal career but he was denied this due to his elder brother squandering the large fortune left by their father. He took holy orders in 1822, eventually becoming a Reverend. From 1822 to 1838 he lived in Dublin and wrote in the Dublin University Magazine and other periodicals. He supported the Reverend Caesar Otway in building up the Irish Quarterly Review.

His Lives of Illustrious and Distinguished Irishmen was published in six volumes (1840-1847) and is an historical compendium of Irish biography. This was embellished with a series of highly-finished portraits by eminent artists. In all his writings Wills gave evidence of a powerful personality. His tone is spirited, and shows considerable dramatic qualities.

Collections of his poetry and writings on philosophy and theology were also published. He died in Attanagh, County Laois. The famous dramatist and painter William Gorman Wills was his son.