Synge: In Wicklow and West Kerry

John Millington Synge (1871-1909) was one of the most influential and controversial dramatists of the twentieth century. He was a leading figure of the Irish Revival who played an invaluable role in the founding of Dublin’s Abbey Theatre in 1904. His family came from a long line of Church of Ireland dignitaries and was also of the ascendancy class, but without any great wealth. 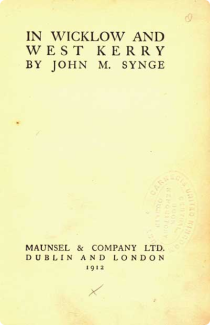 Synge had very strong links with County Wicklow as his grandparents and other relatives had lived there. He spent the summer months in Greystones, and his mother eventually moved the entire household to the quiet fishing village. From an early age Synge would set off to explore and to strike up conversations with the locals.

Although he was of the ascendancy class he had little time for the stiff formality of his peers. He preferred the stories and speech of the Irish peasants living in splendid isolation or to meet with the drifters of the road, farmers and fishermen, believing these individuals to be the repositories of Irish folklore. He was sensitive to the natural landscape as he believed it greatly influenced the temperament of its inhabitants. The nomadic life of the vagrants was one he greatly admired, and believed a life spent out-of-doors led to a healthy and long life. His fascination with the lifestyles of the people of the country is evident throughout In Wicklow and West Kerry.

The book was published in 1910, a year after the death of J. M. Synge. It is a collection of the essays written during his travels through these counties. The essays were originally published in the "Manchester Guardian" and in a quarterly Irish literary magazine, "The Shanachie". They are a valuable document on the inhabitants and their social conditions at the turn of the century. It also contains the raw material, fragments of folklore, patterns of speech and proverbs for some of his plays.

The book itself contains fourteen essays written by Synge. It is divided into three sections: In Wicklow, In West Kerry, In Connemara.

Previous - Lynd: Home Life in Ireland
Next - The Census of Ireland For The Year 1851: Tables of Death