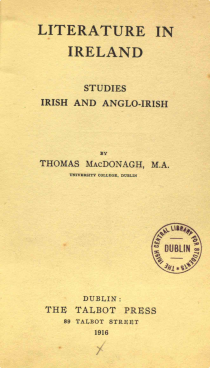 Thomas MacDonagh was a poet and playwright, and also lectured in University College Dublin. He was a member of the Gaelic League, and in 1908 began working as a teacher at Padraic Pearse’s newly-founded school, Scoil Eanna. He also joined the Irish Republican Brotherhood (IRB) and was one of the signatories of the proclamation of the Irish Republic in 1916. He was executed after the 1916 Rising, on May 3rd.

This book is dedicated to the poet George Sigerson. It was published posthumously in 1916. Two other works by MacDonagh were also published in 1916, Poetical Works and the play When the Dawn is Come.

This is a timely examination of Irish and Anglo-Irish literature. It shows the value with which MacDonagh held old Irish literature, as well as the belief in the originality and distinction of the newer English language literature of Ireland. He avoids inclusion of Anglo-Irish authors such as Swift, Steele or Goldsmith, claiming that they have “an attitude rather of dissent from an English orthodoxy than of consent in an orthodoxy of their own or of Ireland’s”.