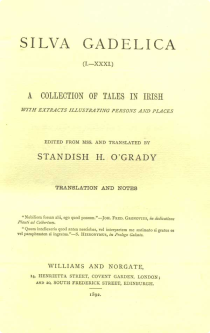 Silva Gadelica is a collection of tales in Irish with extracts illustrating persons and places. In this edition, the English translations are to the front, while the Irish originals are at the back.

O'Grady describes his work like a straw being tossed up to see how the wind blows. In other words, he was testing the judgment of those who urged for this book to be given a good reception. These popular English versions of the Irish tales earned him the title of “father of the Irish literary revival.”

Standish Hayes O’Grady (1832 - 1915) learned Irish from the native speakers of his locality and was later educated at Rugby School and Trinity College Dublin. His profession was as a civil engineer, but he is best remembered for Silva Gadelica.

After moving to America, he contributed to an essay on Anglo-Irish Aristocracy to a collection entitled Ideals in Ireland edited by Lady Augusta Gregory in 1901. O’Grady was unable to his finish his final work - Catalogue of the Irish Manuscripts in the British Museum – before his death, although it was later completed by Robin Flower.