Patrick Henry Pearse (1879-1916), republican and writer, was born on 10 November 1879 at Great Brunswick Street, Dublin, later renamed Pearse Street in his honour. Although he studied law at University College Dublin and was later called to the bar, he never actually practiced law. His first love was for the Irish language and culture. 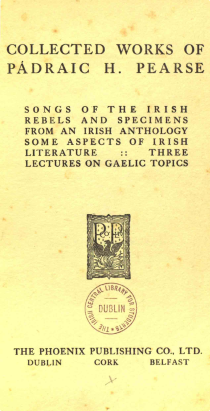 Title page of the Collected Works of Pádraic H. Pearse.

Title page of the Collected Works of Pádraic H. Pearse.

In 1895 Pearse joined the Gaelic League and became editor of its paper, An Claidheamh Soluis (‘sword of light’). He lectured in Irish at University College Dublin, and is remembered for founding St. Enda’s bilingual school for boys in Ranelagh in September 1908 which aimed to foster the Irish language and traditions. The school was so successful that Pearse had to move to a larger building at Rathfarnham in 1910. In July 1914, it was used to store weapons and ammunition that had been smuggled through Howth.

Dedicated to the cause of Irish Nationalism, Pearse was one of the leaders of the Easter Rising of 1916. The Military Council appointed him Commandant-General of the Army of the Irish Republic and President of the Provisional Government. On 24 April 1916, Pearse read the ‘Proclamation of the Irish Republic’ to the public at the group headquarters at the General Post Office on Sackville Street (now O’Connell Street), Dublin. Following the failure of the rising, Pearse (36) was executed along with fourteen others in Kilmainham Jail. He remains one of Ireland’s most loved heroes.

Despite his short life, Pearse wrote many plays, poetry, short stories in both Irish and English, and translated Irish poetry. He contributed to the United Irishman, which was edited by Arthur Griffith, and also edited Macaiomh at St. Enda’s (1909-1913), and An Buarr Buadh (1912).

Collected Works of Pádraic H. Pearse was compiled and edited by his former pupil Desmond Ryan from 1917 to 1922. It contains a collection of songs of the Irish Rebels, Irish stories, essays and lectures on aspects of Irish Literature, folk-songs, and the intellectual future of the Gael. Each is presented in both Irish and English.