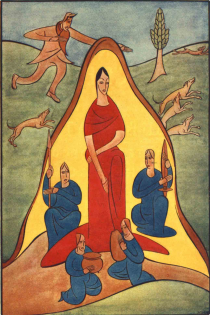 One of the most influential people in Yeat’s life was Maud Gonne, a young Irish nationalist. Yeats quickly became obsessed with her after they met in 1889 and she was inspiration for much of his poetry. Yeats married George Hyde-Lees in 1917 and they had two children, Anne and Michael.

In keeping with his lifelong fascination with Irish folklore and, in the 1890’s, the occult, Yeats spent time at the British Museum of Natural History in London where he researched these subjects and attended lectures. He edited various compilations of stories and poems including A Book of Irish Verse (1895).

In 1897, Stories of Red Hanrahan and the Secret Rose appeared. This book reflects Yeats’ deep and abiding interest in preserving and lauding Irish history and culture. It contains W.B. Yeats' various stories relating to Red Hanrahan, rewritten in the style of the beautiful country speech of Kiltartan. Yeats’ stories of The Secret Rose were written on the subject of the war of spiritual with natural order. This collection of Irish legends and tales in prose interspersed with poetry are testament to the belief that Yeats’ finest work was in his later years.

He died in France on 28 January 1939 at the age of 73 although he now rests in Drumcliff Graveyard, Co. Sligo.

Previous - Pearse: Collected Works
Next - Synge: The Playboy of the Western World