Rhodes: The Plays And Poems Of Richard Brinsley Sheridan 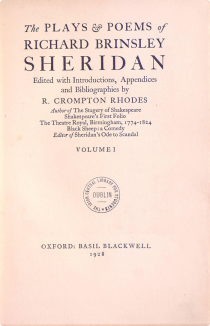 Sheridan was born in Dublin where his wealthy family lived on Dorset Street . His father Thomas Sheridan was an actor and theatre manager before he wrote a number of books on English education while his mother Frances was a successful writer.

The family moved to England in 1758 where Sheridan was a pupil at Harrow School from 1762-68. Sheridan was extroverted, highly popular with his fellow pupils and enjoyed riding and fencing. In 1772, Sheridan fought two violent duels with Captain Matthews while defending the honour of Elizabeth Ann Linley whom he married in 1773. Sheridan also wrote his first plays while studying at Waltham Abbey, became a barrister and entered the Middle Temple in London .

Sheridan developed many political, social and literary contacts. His comedy plays, especially The Rivals (1775) and School For Scandal (1777), were highly successful and provided him with the resources to become owner of Drury Lane Theatre in London in 1776.  School For Scandal is considered one of the finest comedies of manners in English and is said to have been a favorite of American patriot George Washington. His plays parodied the hypocrisy, amorality and duplicity of British high society.

British politics, since the reign of Charles I and the English Civil War, was dominated by the contest between the monarchy and parliament. The Whigs who supported constitutional monarchy with the consent of parliament, were often radically liberal and opposed absolute rule. The Tories were on the side of the Crown. In the late 18th and early 19th century the American and French Revolutions and the Napoleonic wars were supreme challenges. Sheridan served as a Whig MP between 1780 and 1812 during the height of these tumultuous events.

Sheridan was a close ally of the leading Whig, Charles James Fox and the influential Duchess of Devonshire, Fox’s distant cousin. Unusual for a woman at the time, the Duchess was an active political campaigner on behalf of the Whigs and had an illegitimate child with future Whig Prime Minister Earl Grey. At the time the increasingly insane George III was seen by many Whig liberals as actively plotting tyranny with his Tory allies.

Sheridan opposed British military intervention against the American colonists who declared independence in 1776 and welcomed the French Revolution in 1791. He also opposed the Act of Union which merged the Irish parliament with the British Commons in 1801 following the United Irishmen Rebellion of 1798. He became well well known for the oratorical skills and wit he used to devastating effect to ridicule his political opponents. During the debate about legislation designed to counter French spies in Britain , Edmund Burke dramatically emphasized the danger by throwing a knife on the floor of the Commons. Sheridan shouted ‘Where’s the fork?’ dissolving the chamber in laughter.

When it became clear that the French Revolution had degenerated into tyranny, many Whigs defected to William Pitt’s Tories. Britain remained in almost continuous war with France until the defeat of Emperor Napoleon in 1815. When invasion threatened in 1803, Sheridan wrote Address To The People, encouraging defiant resistance. Sheridan served as Treasurer of the Navy (1806-1807) during a brief Whig government but his ambition to become Whig leader and British prime minister was unsuccessful. Sheridan was close to the future George IV, who ruled as Prince Regent from 1811 to 1820 while his father became mentally ill but was not re-elected in 1812. The Prince Regent turned his back on his Whig supporters who helped him to the throne.

Sheridan , like the characters of his plays, led a fashionably dissolute life of gambling, adultery and amassing enormous debts. Drury Lane Theatre was destroyed by fire in 1809 and with the end of his political career, Sheridan 's final years were spent in poverty. Financial assistance offered by the American Congress was rebuffed. He died in 1816 and was buried in the Poet’s Corner of Westminister Abbey.

Previous - Victor: History of the Theatres of London and Dublin
Next - Synge: Four Plays