Synge: The Playboy of the Western World

John Millington Synge was one of the most influential and controversial dramatists of the twentieth century. He was a leading figure of the Irish Revival who played an invaluable role in the founding of Dublin’s Abbey Theatre in 1904. 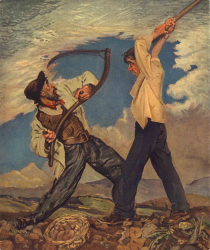 Born in 1871, in a substantial house in Rathfarnham, close to the Dublin Mountains, his family came from a long line of Church of Ireland dignitaries. They were also of the ascendancy class but without any great wealth. He had very strong links with County Wicklow, as his grandparents and other relatives had lived there over a long period of time. Synge spent the summer months in Greystones. His mother moved the entire household to lodgings in the quiet fishing village as its closeness to their relatives in Glanmore Castle suited them. From 1890 the family spent their summers in other locations, notably in Castle Kevin near Annamoe where his uncle resided.

The Playboy of the Western World is a three-act play and was first performed at the Abbey Theatre. It is set in Michael James Flaherty's public house in County Mayo (on the west coast of Ireland) during the early 1900s. It tells the story of Christy Mahon, a young man running away from his farm, claiming he killed his father. The locals are more interested in vicariously enjoying his story than in condemning the immorality of his murderous deed. He captures the romantic attention of the bar-maid Pegeen Mike, the daughter of Flaherty.

Synge believed that the people who had such close ties to the land were in turn affected by the mood of the landscape they inhabited. Synge felt the character of the peasant was shaped by the physical surroundings of the landscape and this often led to depression and a sense of isolation. He also used this theory to great effect in his plays. Masefield and Yeats both remarked that this mind set might be largely due to his ill-health and in pain throughout his life, as Synge suffered from Hodgkins Disease, a form of cancer which was then untreatable.

During and following the opening night, what would become known as The Playboy Riots occurred. The foundation subject matter of patricide was enough in itself to ensure the public were not amenable to the play. A large number of the audience rioted and the actors could only attempt to finish out their performance, unheard. Nationalists, including Arthur Griffith, labeled the play as "a vile and inhuman story told in the foulest language we have ever listened to from a public platform”. The protests only died down when there was little support from the media. The same was to occur in America on its staging there.