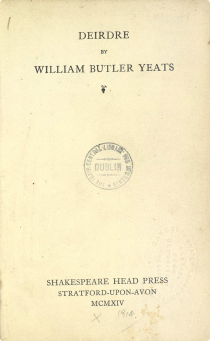 Plays by the Anglo-Irish Nobel prizing winning poet, playwright and theatre impressario, William Butler Yeats (1865-1939) is a collection of five of his best known plays in one volume. They include Deirdre, King's Threshold, The Land of Heart's Desire, The Pot of Broth and The Countess Cathleen. The plays deal with important Irish political, mythological and religious themes interwoven with Yeats' own occult beliefs.

Deirdre is based on a legend from the Ulster cycle. When it is foretold that the infant girl Deirdre will bring war to Ulster, King Conchobar Mac Nessa adopts her rather obey those who wish to kill her. When she grows up to be a young maiden he lustfully plans to make her his wife. However she flees to Scotland with her lover, the warrior Naoise. Conchobar's men track them down, killing Naoise and his brothers and carrying Deirdre back to Ulster.

The evil King plans to force Deirdre to marry the man she hates most in the world, the assassin who killed her husband but as she rides with Conchobar in a chariot she throws herself to her death. The fate of Deirdre can be interpreted as a parallel of the fate of Ireland. The popular historical narrative of Irish nationalists was of invasion and conquest and the enslavement and impoverishment of the Gaelic Irish.

The King's Threshold is a play about a bardic poet named Seanchan in the court of King Guaire in the 6th century. Seanchan is banished from his place at the King's table and is no longer consulted for advice. This breaks the traditional unity between the poet, king and warrior common to Celtic and Viking myths such as Beowulf. The poet's role is to glorify the past and to poeticise the present for future generations in order to pass on the noble virtues of wise kingship and the self-sacrifice of the warrior.

Yeats rejected modern materialism which as he saw it had contempt for the supernatural, religion, poetry, art and beauty. Seachan begins a hunger strike protesting the centrality of the poet in the hierarchy of political power. The hunger strike was incorporated into the ancient Brehon Law system and would be revived by Irish republican prisoners in the 20th century. The imprisoned Mayor of Cork, Terence McSwiney, died after a hunger strike in 1920 during the Irish War of Independence.

In The Land of Heart's Desire, a couple, Shawn and Maire Bruin, are tempted by a fairy girl to leave the material world and narrow Catholicism represented by Father Hart behind. The girl tells them they can enter the pagan world of laughter and eternal youthful dance. Shawn refuses to go but Maire Bruin falls under her spell and dies in his arms, her spirit drawn into the other world of mindless joy and immortality. The play is a metaphor for a romantic Ireland with its potential constrained by imperialism, narrow materialism and soulless religious dogma.

The Pot of Broth is set in an Irish cottage visited by a wayfarer who fools a greedy Irish couple into boiling him a pot of broth. He convinces them that a stone he carries has magical properties and talks them into adding ingredients to his 'stone broth.' He cheats a free meal out of them and goes on his way after the couple purchase the stone and attempt to prepare a meal for the priest. The fun loving hero forsakes materialism and lives by his wits while his victims are unimaginative and easily taken in due to their greed.

The Countess Cathleen represents Maud Gonne, Yeats' muse, who to the poet's horror married staunch Irish republican, John MacBride. Gonne saw Yeats, a committed nationalist himself, as timid compared to the heroic MacBride. A dashing man of action, he fought against the British in the Boer War and was executed for his part in the 1916 Easter Rising. Yeats often envisioned the object of his spurned love as a mythological goddess in other works. The altruistic countess sacrifices herself for her starving tenants and ascends into heaven.

Previous - Yeats: A Vision
Next - Yeats: Four Plays For Dancers