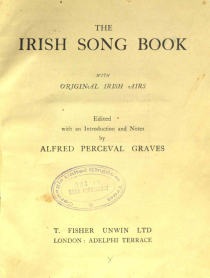 Graves, Alfred Perceval 1846-1931Ā
Ā
The Irish song book was first published in 1894. It is edited with an Introduction and Notes by Alfred Perceval Graves. ĀThis collection of 119 songs, with music, includes many that older readers will remember from their schooldays. ĀĀThe book provides a glossary of Irish words, an index to first lines and a list of the titles of the original airs used.
Ā
Alfred Perceval Graves was born in Dublin and educated in England and Āat TCD. He worked as a British civil servant and later as an inspector of schools. He was a contributor of prose and verse to The Spectator, Punch and many other journals. He wrote songs and ballads, wrote lyrics for old Irish tunes and published a number of collections of Irish songs. His song Father O’Flynn is regarded as stereotypically Irish. He was for several years president of the Irish Literary Society and was active in the Irish literary revival.