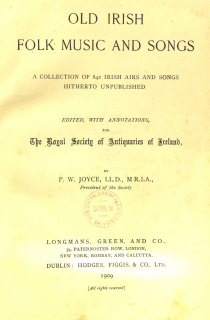 Patrick Weston Joyce (1827-1914) was born in Co. Limerick. He was a writer and was passionate about Irish history, language and music, on which he produced many works. Some of these include The Origin and History of Irish Names of Places, A Concise History of Ireland, and English Language in Ireland. He was a collector of Irish music and made contributions to Dr. George Petrie’s The Petrie Collection of the Ancient Music of Ireland (originally printed in 1855).

Influenced by Dr. Petrie, Joyce set about recording the music and songs of his youth. He also spent time gathering more unpublished songs from the people, principally in the south of Ireland. The P. W. Joyce Collection is kept at the Cregan Library in St. Patrick’s College, Drumcondra, Dublin.

While this book indicates that Joyce has gathered together a previously unpublished selection of Irish songs, some qualifications to this claim are made in the opening lines of the preface. Joyce explains that different versions of some of the songs may previously have been printed. In Part II of the book, he has also reprinted some tunes that had been published for the first time in his two previous books, Ancient Irish Music and Irish Peasant Songs in the English Language.

Old Irish Folk Music and Songs is divided into four sections. A brief introduction to the origins of Irish songs and airs is given in the preface. Part I and Part II are a compilation from Joyce’s own collection, for example songs recalled from his early life in Co. Limerick, where music played a central role in his upbringing. Part II focuses on Irish folk songs in the English language. Parts III and IV consist of the collections of the Cork musician, William Forde, and of John Edward Pigot.