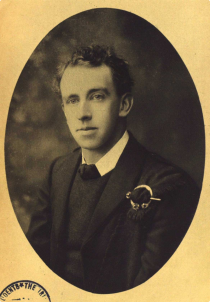 Thomas MacDonagh was a poet and playwright, and also lectured in University College Dublin. He was a member of the Gaelic League, and in 1908 began working as a teacher at Pßdraic Pearse’s newly-founded school, Scoil ╔anna. He also joined the Irish Republican Brotherhood (IRB) and was one of the signatories of the proclamation of the Irish Republic in 1916. He was executed after the 1916 Rising, on May 3rd.á

á
The Poetical Works of Thomas MacDonagh was published posthumously. Two other works by MacDonagh were also published in 1916, Literature in Ireland; Studies, Irish and Anglo-Irish and the play When the Dawn is Come.
á
An introduction to The Poetical Works of Thomas MacDonagh is written by James Stephens, dated 10th August, 1916. Stephens, also a poet and writer, reflects on his friendship with MacDonagh. He describes a self-less, good-natured man who was utterly content in his own company and in that of his friends.á
á
This volume contains a total of ninety-seven poems and is sub-divided into seven sections: “Songs of myself”, Lyrical Poems”, The Book of Images”, “Translations”, “Early Poems”, “Inscriptions” and “Miscellaneous Poems”.

Previous - Brooke & Wolleston: A Treasury Of Irish Poetry In The English Tongue
Next - Moore: The Poetical Works of Thomas Moore