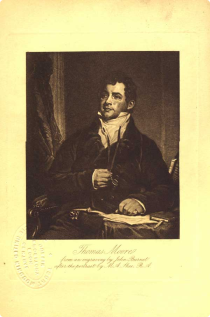 This book represents the most complete edition of Moore’s work, with only one omission – “The Fudges in America .”

In some parts of this book, Moore’s own notes on the poem are included, while in other parts Moore’s classical and post-classical references and quotations have been omitted. If they are included, they are as he would have written them.

Thomas Moore was born in Dublin 1779 to Catholic parents, who owned a grocery shop. From an early age it was apparent that he had ‘a make of verse’. In 1790, at the age of eleven, he went into print, writing the epilogue for a school play acted at Lady Burrowes’ private theatre in Dublin.

In 1793 the Dublin magazine – Anthologia – published two of his short pieces. Later, Moore was educated in Trinity College Dublin when the rule against Catholic students was relaxed. He then went on to study law at the Middle Temple in London.

It was in England that he progressed from being a poet to a balladeer and singer. His work soon became immensely popular and included The Harp That Once Through Tara’s Halls, Believe Me If All Those Endearing Young Charms and The Meeting of the Waters.

In London, his completed version of Odes of Anacreon was published. Then, in 1802, he published the collection of Juvenile Poems with which this book begins. It was after a trip to Canada and the United States that he published Epistles, Odes, and Other Poems. On his return to England he married actress, Elizabeth "Bessy" Dyke, in 1811. After living in Paris for a number of years because of debts in England Moore edited and published Letters and Journals of Lord Byron, with Notices of his Life (1830).

His later life included tragedy and illness and his remains are in the vault at St. Nicholas, Bromham.