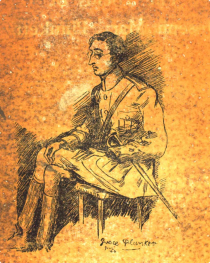 A sketch taken from The Poems of Joseph Mary Plunkett, published posthumously in 1919.

A sketch taken from The Poems of Joseph Mary Plunkett, published posthumously in 1919.

Joseph Mary Plunkett (1887 - 1916) was born in Dublin and was a member of a distinguished Co. Meath family. His parents were Count and Countess Plunkett, and St. Oliver Plunkett, the 17th century martyr for the Catholic faith, was his ancestor.

Plunkett was gifted poet and journalist, and together with Thomas MacDonagh, he co-edited The Irish Review newspaper. He was also a founder of The Irish Theatre in 1914, with Edward Martyn and Thomas MacDonagh. A strong Irish nationalist, he was also a leader in the IRB preparations for the 1916 Rising, despite his failing health due to TB. He was imprisoned at Kilmainham Gaol following the Rising, and was permitted to marry his fiancé, Grace Gifford, on the eve of his execution. He was shot by firing squad on 4th May, at the age of twenty-eight.

This collection of Joseph Mary Plunkett’s poetry was published posthumously by his sister, Geraldine Plunkett Dillon, in 1919. She introduced the collection in her foreword, which was written in June 1916, giving an overview of her brother’s short life as well as some of the poetry included in the collection.

The Poems of Joseph Mary Plunkett is divided into two sections. Plunkett himself had planned that the first section, “Occulta”, was to be published as his second book. The order in which it appears in this book is the original order that Plunkett had arranged. These poems were written between November 1911 and July, 1915.

The second section of the book contains selected earlier poems that originally appeared in his first book, The Circle and The Stone, together with his later poetry. Unfortunately, much of his poetry was destroyed, leaving some poems of the second section fragmented. The book concludes with a reprint of an article by Plunkett,“Obscurity and Poetry”, in which he examines the task of the poet as an artist.

Previous - Plunkett: The Circle and the Sword
Next - Yeats: Early Poems And Stories