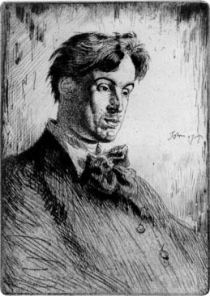 Early Poems And Stories by William Butler Yeats (1865-1939) published 1925 contains a collection of poems and stories from the late 1880s and early 1890s. During this period Yeats was a young struggling poet impressed by the tales and myths of the Celtic past.

Yeats would always be a mystic who believed it was possible to communicate and receive messages from the spirit realm. He took mind altering drugs and attended séances that were popular in the late 19th century and the turn of the 20th century.  Combined with the nationalist outlook he inherited from his father, painter John Butler Yeats, it fuelled his fascination with all things Gaelic. The folklore of the Irish Catholic peasants spoke of fairies or Tuatha Dé Danann, the pre-Christian deities and the púca, a fearsome shape shifting creature.

Early Poems And Stories is divided into a number of sections including The Wanderings Of Usheen, Crossways, The Rose, The Celtic Twilight, The Secret Rose, Stories Of Red Hanrahan and Rose Alcemica. The original versions, written when Yeats was a young man, was revised and re-edited by his older self.

The Gaelic pre-Christian past is reimagined in 'The Wanders of Usheen' or Oisin, the son of Fionn Mac Cumhaill, the leader of the Fianna. Oisin fell in love with Niamh of the Golden Hair and rode with her to Tír na nÓg, a land of eternal youth and beauty. He lives as one of the Sidhe or one of the supernatural race that lived in Ireland before the Gaels arrived and defeated them.

Upon his return he finds centuries have come and gone. The age of the Fianna has been replaced by the Christian world devoid of the pagan pursuits of pleasure, hunting and adventure. He accidentally falls from his horse and becomes a shrivelled old man.

In Yeats' work, the final degradation of Oisin could be said to be a  metaphor for the pitful state that Irish cultural nationalists such as Yeats felt Ireland was in under imperial British rule. Irish nationalists believed that Ireland was stripped of its native Gaelic language, culture, heritage and tradition.

The section called The Celtic Twlight, is a collection of Irish fairy stories told to Yeats or his own subjective experiences with fairies. Yeats was involved in a mystical group called the Hermetic Order of the Golden Dawn who believed technology and urban living had separated mankind from the magical realm. Yeats researched folk memory to discover tales and legends that were otherwise long forgotten. He includes his own opinions and commentary and alleges that the ancient pagan spirits and the Catholicism of modern Ireland live in harmony together.

The visions and supernatural experiences of a fictional hedge school teacher with supernatural powers based on the real life poet Owen Red O'Sullivan form the basis of Stories Of Red Hanrahan. Another story, The Rose was influenced by Yeats' unrequited love for Maud Gonne (she married Major John McBride, executed for his part in the 1916 Rising) whose dark untamed beauty came to embody Ireland in his poetic imagination.