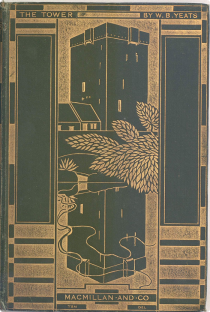 An illustration of Thoor Ballylee where the poet William Butler Yeats had his summer home from 1919. The tower has powerful metaphorical symbolism in his poetry.

An illustration of Thoor Ballylee where the poet William Butler Yeats had his summer home from 1919. The tower has powerful metaphorical symbolism in his poetry.

The Tower by William Butler Yeats (1865-1939) was first published in 1928. It contains many of the poet's best known poems such as The Tower, Sailing To Byzantium, Leda And The Swan and Among School Children as just a sample. The themes of the poems in the collection dwell on the elderly poet's angst about the decline of old age, his creative drive, missed romantic opportunities and nationalist disillusionment following Irish Independence.

Yeats served as a Senator in the Irish Seanad for two terms during the 1920s following the Irish Civil War. As Yeats saw it, the Irish state deferred to the social, political and cultural dominance of the conservative Roman Catholic Church. Yeats came from the Anglo-Irish Protestant elite who had dominated Irish life under British rule and found his class increasingly alien in the new reality.

His liberal tolerant attitudes to moral matters including divorce was out of step with the populist mood. His physical decline and popular hostility and indifference to the Anglo-Irish Protestant tradition led him to reflect on mortality, the effects of war and rebirth through art.

Sailing To Byzantium describes how the young Irish state is 'no country for old men.' Paradoxically Yeats has a beating heart in his old body. He wishes to be reincarnated as a work of art and achieve immortality.

The Tower laments the loss of youth and the impotence of old age restricting Yeats' still youthful intellectualism and physical desires. The tower is a metaphor for the fall of the Protestant Ascendancy who had many of their stately homes burned by vengeful Irish republicans. The Tower also refers to Ballylee Tower which was Yeats' retreat in Co. Galway. Maud Gonne, his muse, is depicted as a peasant girl whose captivating beauty leads men on to destruction like Helen of Troy in Greek legend.

Leda and The Swan is based on the Greek myth of how Zeus took on the form of a swan to rape the Trojan queen, Leda, to hide his identity. She became pregnant with Helen of Troy, over whom the Trojan War was fought. Yeats' is continuing the Helen of Troy metaphor for Maud Gonne, an ardent Irish nationalist, who encouraged others to become involved in revolutionary activity. The blind passion of the Greek heroes mirrors the passions of Irish patriots.

Among School Children describes a visit by the elderly Yeats in his role as a Senator to a school where a nun describes the school curriculum. Yeats is drawn to a young girl who reminds him of the now elderly Maud Gonne who has lost her youthful beauty. He imagines what Maud Gonne would have looked like as a child. He reflects on the contrast between the innocence of the child and what Gonne has now become as an old woman. Yeats ponders whether man acts or is acted upon and whether destiny controls his fate.

The other poems deal with similar subject matters and recycle many of the same images, themes and literary illusions.