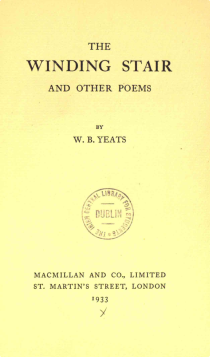 One of the most influential people in Yeat’s life was Maud Gonne, a young Irish nationalist. Yeats quickly became obsessed with her after they met in 1889 and she was inspiration for much of his poetry. Yeats married George Hyde-Lees in 1917. They had two children, Anne and Michael.

Yeats had a strong interest in spiritualism, Irish myths and legends, and his celebration of Irish culture is reflected in much of his poetry. He was a master of the traditional verse and was awarded the Nobel Prize for literature in 1923. He was also given a seat in the Senate in 1922, and his experiences as a Senator are reflected in the poems “Among School Children”, and “Sailing to Byzantium”. He died in France in 1939.

The title of this volume of poetry, The Winding Stair, refers to the staircase in Yeat’s home in Thoor Ballylee Castle. The phrase “winding stair” is used in the poem “A Dialogue of Self and Soul”, which is an exploration of the opposition between the spiritually-minded man of God and the worldly-minded man of the sword.

This is a later collection and is seen as part of his final phase of poetry. The book is dedicated to Edmund Dulac, French book illustrator.

Previous - Yeats: The Tower
Next - Literature and Theatre