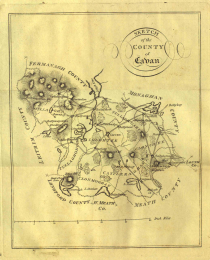 Map of Cavan, taken from The Statistical Survey of the County of Cavan, 1802.

Map of Cavan, taken from The Statistical Survey of the County of Cavan, 1802.

Sir Charles Coote's Statistical Survey of the County of Cavan was published in 1802 for the Dublin Society. The Dublin Society was founded in the 18th century "to promote and develop agriculture, arts, industry, and science in Ireland ." The 'Royal' prefix was added when George IV became its patron in 1820. Coote travelled to County Cavan , a region known for its lakes, drumlins and wetlands to investigate its society and its agricultural economy. In the years following the 1798 rebellion, the creation of the United Kingdom through the Act Of Union 1801 and the practicalities of the Napoleonic Wars meant  improving agriculture in Ireland became increasingly important.

Historically the Cavan and Leitrim region was known as the Kingdom of Briefne meaning 'hilly'. It had been a troublesome and rebellious region of Ireland dominated by the rival O'Rourke and O'Reilly clans who cleverly used its hills, hundreds of lakes and wetlands to hinder English attempts to conquer their territory. The Gaelic clans nonetheless were influenced by the Normans who they imitated by buildings stone fortresses and strongholds.

However during the reign of the Tudors and Stuarts the native Gaelic Irish were finally defeated and in subsequent centuries the area was planted with English and Scottish Protestant settlers who established the towns of Bailieborough, Cootehill, Killeshandra and Virginia. Rebellion in 1641 by the Gaelic Irish led to defeat at the hands of Cromwell and further colonisation. Generally Gaelic Irish and Old English Catholic resistance was put to an end after the Battle of the Boyne in 1690.

Coote's survey investigated the agricultural development of the region which included pig, dairy and beef farming. He describes how much of the soil was poor - "gritty, amd extremely rocky and boggy' with large areas of wetland and swamps. He believed however that much of it could be reclaimed and put to agricultural use.

The inhabitants lived in wretched poverty often sharing their hovels with their animals. Coote observed that they were highly religious, anxious to educate their offspring although they were  superstitious and ignorant. A typical family of an agricultural labourer depended on six to ten pence to feed their large broods of children and many were forced to beg and steal to survive. Coote noted that the peasants were generally either rebellious or sought to emigrate.

In his conclusions Coote laments this economic underdevelopment and exorts landlords to lead the way by introducing new industries. The soil of the county he believed could have benefited from proper drainage and manuring with lime, the dire roads needed improvement, while the flax industry was in a miserable state. The population was especially vulnerable due to their dependency on a basic diet of potatoes.

By the 1840s the situation in Cavan had worsened as the land could not support the exploding population which across the island had increased to approximately 8 million. The region suffered terribly in the Great Famine when blight caused the failure of the potato crop. Many of the victims died from starvation and outbreaks of cholera and typhus.