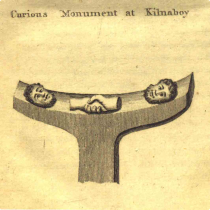 Hely Dutton's Statistical Survey of the County of Clare was published in 1808 for the Dublin Society as part of a series of surveys covering the counties of Ireland. The context of these surveys was in the wake of the 1798 rebellion, the Act of Union 1800 and the Napoleonic Wars when the economic development and the improvement of agriculture in Ireland was increasingly important. Britain was beginning its industrial revolution and the survey would make interested investors and capitalists aware of the economic potential of their sister island.

The first section covers the geography of Clare and its climate, soils and mineral wealth. The second section examines Clare agriculture, its farming methods, crops, yields, harnessing of oxen and animal husbandry. The third section covers the cattle industry, grass, hay, dairying and the market for hides and wool. The fourth section studies Clare farms, the relationship between landlords and tenants, leases, tenures, taxes and cesses, the size of fields and enclosures and manures used. The fifth section deals with general subjects ranging from education, river navigation, exploitation of bog land, manufacturing, fishing, religion and other aspects of Clare society. Dutton makes his conclusions and puts forward suggestions for the improvement of Clare's agriculture and economy.

Dutton was impressed by the natural diversity and contrasts in the environment of County Clare. The most fertile lands bordered the River Shannon and Lough Derg while in the Burren only the hardiest goats and other animals would survive on the harsh karst limestone landscape. He observed the hospitality and friendliness of the people but did not miss the contrast between the lifestyles of the wealthy landowning gentry and their poor tenants. He also observed that there was little religious intolerance and that Catholics and Protestants intermarried free from 'bigotry and rancour.'