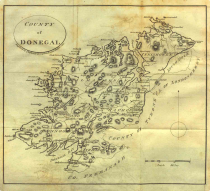 James McParlan's Statistical Survey of The County Of Donegal was first published in 1801 as part of a statistical study county by county of the island of Ireland on behalf of the Dublin Society (later the Royal Dublin Society) during the early 19th century. McParlan investigates the geography of County Donegal, its society, both urban and rural, its economy and suggests measures to improve it.

Donegal is on the extreme north west of Ireland and is bounded by the Atlantic to the west and north and Lough Foyle to the east. McParlan describes its series of peninsulas and inlets with rugged mountains, boglands and some fertile valleys between. He was struck by the natural beauty and remoteness of much of the landscape as he describes all aspects of the region. Topics covered are the economy including mining, fishing and farming, local government, the landed estates, towns and villages, the income, diet, customs and lifestyles of the locals, the practise of religion and much more. The information in the volume provides a revealing snapshot of the area just after the turn of the century.

The county of Donegal was created in 1585 when the ancient Kingdom of Tryconnell was amalgamated with the Lordship of Inishowen. However it was not until the Gaelic defeat at Kinsale in 1602 and the exodus of the Gaelic Earls of Tyrconnell and Tyrone who fled to Europe in 1607, that the English could exert full control over the region.

By the 19th century the majority of the Catholic Gaelic Irish in County Donegal lived in dire poverty surviving on a stable diet of potatoes while paying rents to their Anglo-Irish Protestant landlords and tithes to the Church of Ireland. The gradual repeal of the Penal Laws beginning in the late 18th century and in time Catholic Emancipation in 1829, would improve their political position considerably.

However the agricultural economic boom that resulted from the Napoleonic Wars came to an end in 1815 leading into a downward economic decline. In the 1840s the Great Famine ravaged the county leading to the depopulation of entire regions, many having been described by McParlan in his survey, due to starvation, disease and mass emigration.

In 1801, McParlan summed up the economic situation in Donegal succinctly:

"One of the principal obstacles is, a want of capital and knowledge in the poor, and of spirit and enterprise in the rich"

Previous - Derry
Next - Down