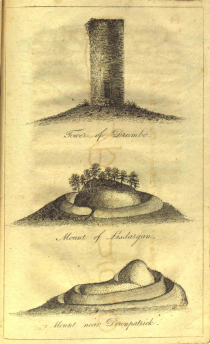 Sketches of the Tower of Drumbo, the Mount of Lisdargan and a Mount near Downpatrick, taken from Doubourdieu's Statistical Survey of the County of Down, 1802.

Sketches of the Tower of Drumbo, the Mount of Lisdargan and a Mount near Downpatrick, taken from Doubourdieu's Statistical Survey of the County of Down, 1802.

Statistical Survey Of The County Of Down by Reverand John Dubordieu was published in 1802 on behalf of the Dublin Society (later the Royal Dublin Society). At the time the United Kingdom had just been created by the Act of Union 1800, a year later war would recomenced with France while Britain was experiencing the beginning of its industrial revolution. The survey details the geography and topography of the area and a detailed snapshot of industry, geography, agriculture, religion, living conditions and much more of County Down just after the turn of the 19th century.

County Down has a long coast line facing the Irish Sea with the Ards and the Lecale peninsulas and Strangford Loch the most prominent features. The North Channel separates County Down from southwestern Scotland . The most important waterways in the county are the Bann, Clanrye and Quoile rivers while part of the county boundary is the shore of Lough Neagh , the largest inland lake in Ireland . The highlands of the Mourne Mountains are celebrated for their natural beauty. The highest peak is Slieve Donard at 849 m (2,785 ft).

After the 12th century Norman conquest , Ulster dominated by the powerful O'Neill clan remained the centre of sustained resistance to English encroachment. The Earl of Essex aided by Sir Thomas Smith and Sir Francis Drake massacred Gaelic clansmen in an attempt to establish a plantation in the late 16th century before the plan was abandoned by Elizabeth I. However following the Gaelic defeat at Kinsale, James I of England also known as James VI of Scotland began to plant the region with lowland Scottish and Northern English Protestants. The Catholic Irish resisted and were defeated in a series of wars in the remainder of the 17th century culminating in the victory of Protestant forces at the Boyne under King William III of Orange in 1690.

By the turn of the 19th century, Ulster and County Down in particular had become a bastion of Protestantism and loyalism. Although some radical Protestants had made common cause with Catholics in the republican United Irishmen rebellion of 1798, the majority saw their interests bound up in the United Kingdom which was created by the Act of Union 1800. East Belfast and towns such as Newry, Dundonald, Newtownards, Bangor , Banbridge, Downpatrick and Holywood all prospered from the profitable flax and linen industry in the 19th and 20th centuries.

However penal laws persecuted both Catholics and Presbyterians until the early 19th century and both communities resented paying tithes to the established Anglican Church which were mandatory until they were abolished in 1863. In the 18th and 19th centuries, tens of thousands of Ulster Protestants from County Down emigrated to America and were a major influence in the formation and history of the United States of America .

In the late 18th century County Down was the scene of sectarian and agrarian strife between Protestant 'Peep O'Day Boys' and Catholic 'Defenders' culminating in the creation of the Orange Order. During the 19th and early 20th century the mobilisation of Roman Catholics, Irish nationalists and republicans behind a concerted push for Home Rule was resisted by the Orange Order allied with Ulster unionist politicians and the Conservative Party in Britain .

After the Irish Revolution 1916-1923, Ireland was partitioned into two states, the twenty six county Irish Free State that later became the Republic of Ireland and the six Ulster counties of Northern Ireland dominated by a unionist Protestant majority. Between the late 1960s and late 1990s County Down like the rest of Northern Ireland was the scene of vicious sectarian violence between rival loyalist Protestants and Catholic nationalist republican paramilitary groups until the 1998 Good Friday Agreement secured an uneasy peace. In the early 21st century a slow process of religious and political reconciliation was ongoing.

Rev. John DuBourdieu (1755-1839) was a clergyman based in Annahilt, Co. Down who was also a statistician and surveyor of note. His son Francis Rawdon Hastings DuBourdieu (1784-1855) was a soldier, businessman, engineer and architect.