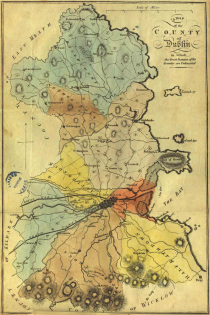 Statistical Survey Of The County Dublin by Joseph Archer was published in 1801 and produced for the Dublin Society (later the Royal Dublin Society). It is a survey of the economic and social conditions in Dublin city and County at the turn of the 19th century. Observations On Mr. Archer's Statistical Survey Of The County Dublin by Hely Dutton was published  the following year was critical of Archer's original survey.

At the turn of the 19th century, the United Kingdom was created by the Act Of Union 1800 bringing the centuries old Irish government to an end. The events of the 1798 United Irishmen had convinced the British government that future rebellion combined with the threat of French invasion necessitated bringing Irish political and legislative autonomy to an end. This would have economically negative conquences for Dublin as most of the politically powerful and the rich and wealthy deserted Dublin for London . Thereafter its Georgian grandeur gradually faded and mansions and townhouses in time became slums. Many of the lower classes had worked as servants in these Georgian houses and found themselves without work.

Ireland would remain much less industrialised than Britain and its economy was to remain predominantly agricultural well into the 20th century. The Anglo-Irish Protestant Ascendancy owned the majority of the land in the country and became wealthy especially from the export of grain. The majority of the Gaelic Catholic Irish peasantry survived on a basic diet of potatoes and in much of the country there were little or no roads and a cashless subsistence economy. This would lay at the root of the Irish Potato Famine which would cause starvation both in the rest of the country and in Dublin in the 1840s.

Previous - Down
Next - Galway