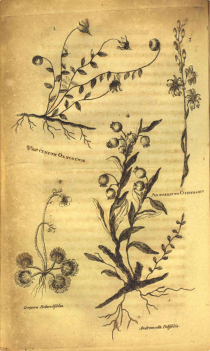 Sketches of plants in Meath. Taken from Thompson's Statistical Survey of the County of Meath, 1802.

Sketches of plants in Meath. Taken from Thompson's Statistical Survey of the County of Meath, 1802.

A Statistical Survey of the County of Meath by Robert Thompson was published in 1802 on behalf of the Dublin Society (later the Royal Dublin Society). It was produced in the context of the aftermath of the 1798 rebellion, the passage of the Act of Union 1800 and an agricultural boom due to the Napoleonic Wars. The survey covers topics such as topography, geography, natural flora and fauna, farm development, living conditions, wages, livestock, transport, industry, religious practices and much more.

The territory of County Meath corresponds with the eastern portion of the ancient Kingdom of Mide . The area was controlled by the Gaelic Irish Clann Cholmáin, a branch of the O'Neill clan. Tara was the royal seat of the High King of Ireland who was usually the strongest Gaelic king of the other four rival provinces of Ireland . The most famous High King was Brian Ború who defeated the combined forces of the Kingdom of Leinster and the Vikings at the Battle of Clontaf in 1014. No Gaelic Irish royal dynasty retained the High Kingship for very long unlike medieval Norman England where a strong hereditary monarchy emerged.

In the 12th century following the Norman invasion, King Henry II became Lord of Ireland and Norman feudal lords beginning with Hugh De Lacy controlled the so-called 'Liberty of Meath' which included portions of the neighboring present day counties of Westmeath, Cavan, Dublin, Kildare, Longford, Louth and Offaly. Trim Castle was the administrative centre of the territory and it is reputed to have once hosted the medieval Irish Parliament.

After a series of religious wars between Catholics and Protestants in the 16th and 17th centuries, Ireland came under the control of an Anglo-Irish Protestant landowning elite. The overwhelming majority of the rural poor, tenants and landless peasants were Gaelic Irish Catholics who had endured centuries of political, economic and religious oppression. At the turn of the 19th century County Meath like other counties in Leinster had some of the most productive land on the island of Ireland . While the landlords lived in well appointed mansions, the lower classes lived in wretched poverty, suffered due to rising food prices, paid increasingly exorbitant rents and obligatory tithes to the Anglican church regardless of their faith while surviving on potatoes.

The Great Irish Famine claimed the lives of approximately a million and forced the emigration of a million more during the 1840s. County Meath did not suffer as badly as the rest of the country, particularly the west, however the population of the town of Kells alone fell by 38% during the period. Decades of agrarian agitation by the Land League and the Irish Parliamentary Party followed in County Meath and elsewhere. By the early 20th century most of the land was owned by Catholic landowners and the Anglo-Irish estates had been broken up after a series of sweeping land reforms.