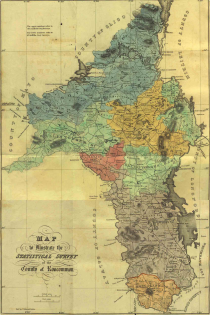 A Statistical Survey of the County Roscommon by Isaac Weld (1774–1856) was published in 1832 and is an indepth study of all aspects of the economiy, geography and society of County Roscommon in the early 19th century. He discusses topics which include topography, transport, living conditions, crops, farms, wages, religion and much more. The survey provides a revealing snapshot of the county approximately a decade before the catastrophe of the Great Irish Potato Famine 1845-1852.

Ireland in the early 19th century was economically backward compared to an increasingly industrialised and urbanised Britain . An increasingly wealthy and literate middle class forced the passage of the reform legislation that granted them the right to vote for MPs to the House of Commons while Chartists were beginning to campaign for the rights of the working classes. Catholic Emancipation was passed in the 1829 due to the effort of Daniel O'Connell allowing Irish and British Catholics to sit in Parliament.

However Irish society especially in County Roscommon remained feudal and agricultural. The vast majority of the Gaelic speaking Irish Catholic poor lived in wretched poverty, living in clay cabins and surviving on a basic diet of potatoes. The potato crop supported an increasing population of Irish peasants living on ever smaller plots of land that were subdivided generation upon generation. It was said that a young newly married couple only needed a spade and a bag of seed potatoes to live independently and begin a family of their own. Infant mortality was high so families were large to maximise survival for the next generation. When the potato crop failed repeatedly between 1845 and 1852, a million Irish people died of starvation and disease and a million more emigrated. A pattern of mass emigration continued until the 20th century in County Roscommon and the Connaught region generally.

The Catholic poor in rural Roscommon had little security of tenure and failure to meet exorbitant rents often meant eviction and destitution. At the height of the famine the workhouses which gave the poor food in return for work were overwhelmed. Local government and the legal system was dominated by and served the interests of the Anglo-Irish Protestant class while the established Anglican church was supported by obligatory tithes regardless of the inhabitants religion. Labourers who worked the estates raising cattle and tending crops which were exported to feed the growing demands of the expanding British industrial cities and colonial empire rarely could afford to consume this food themselves.

After the famine railways connected Roscommon with the outside world in the 1860s but the plight of the rural poor continued. The activities of the Fenians, the Land League and the Irish Parliamentary Party led to a sustained period of agrarian agitation during the 1880s. A resurgent Catholic Church played a major role in educating and providing for the rural poor. By the turn of the 20th century a series of land acts had been passed and estates were broken up and sold to Irish tenants.

Isaac Weld was an Irish artist, topographical writer and explorer. He was born in 1774 on Fleet Street , Dublin , educated at Whyte's school, Grafton Street and Norwich , Norfolk and married Alexandra Hope in 1802 following a move to Edinburgh . He was a close friend of the Whig leader Charles James Fox, a brother-in-law was George Ensor and during a period spent in Rome he came to know Antonio Casova. He was named after Sir Isaac Newton who was a close friend of his great grandfather.