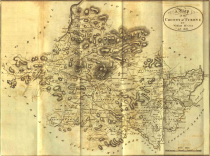 Map of Tyrone, taken from McEvoy's Statistical Survey of the County of Tyrone, 1802.

Map of Tyrone, taken from McEvoy's Statistical Survey of the County of Tyrone, 1802.

Statistical Survey Of The County Of Tyrone by John McEvoy was published in 1802 on behalf of the Dublin Society (later the Royal Dublin Society). It was created in the context of the Act of Union 1800, conflict between Britain and France and the emerging industrial revolution. The survey discusses the geography, topography, agriculture, industry, living conditions, religious practise, civil adminstration and much more of County Tyrone just after the turn of the 19th century.

Tyrone or Tír Eoghan was the traditional stronghold of the powerful O'Neill clan who dominated the province of Ulster before and after the Norman conquest of Ireland in the 12th century. They continued to defy English encroachment and to raid English settlements in the rest of the country until the late 16th and early 17th centuries when they suffered a series of reversals and final defeat at Kinsale in 1603. In 1607 the Earls of Tyrconnell and Tyrone fearing arrest and execution fled to the European Continent. James I of England also known as James VI of Scotland moved swiftly to plant Ulster with lowland Scottish and Northern English Protestant settlers beginning in 1609.

In the 17th century tens of thousands of Protestant settlers colonised County Tyrone displacing the native Catholic Gaelic Irish. After a series of ethnic and religious rebellions and wars throughout the century, Catholic Irish resistance was finally crushed in 1691 by the forces of Protestant King William III of Orange . Penal laws were instituted persecuting both Catholics and Presbyterians but were finally repealed by the early 19th century. For a short period some Presbyterians allied themselves with Irish Catholic republicans during the 1798 United Irishmen. However the formation of the fiercely loyalist and anti-Catholic Orange Order across Ulster , increasing industrialisation and prosperity and the rise of Irish nationalism and separatism convinced the majority of Protestants that their interests were bound up with the United Kingdom .

The principle towns of County Tyrone in the 19th century were Omagh, Cookstown, Dungannon and Strabane and these population centres prospered from the industrial revolution especially due to the profitable flax and linen industry. The prevailing practise of Ulster landlords was to recognise improvments made by their tenants to their property in contrast to southern Ireland where Catholic tenants and landless peasants faced the constant threat of eviction. During the subsequent Irish Potato Famine of the 1840s County Tyrone did not suffer as badly as counties in Connaught, Leinster and Munster but emigration of both Catholics and Protestants to America was high in both the 18th and 19th centuries.

Following Catholic Emanicipation in 1829 there was a resurgence in Irish nationalism particularly in the south of Ireland . The Protestant community were a minority in mid Ulster unlike their counterparts in Antrim and Tyrone who increasingly embraced the militant Orange Order and supported the agitation of Ulster unionist politicians allied with the Conservative Party against Home Rule. County Tyrone Protestants feared the political power of the Irish Roman Catholic Church and were convinced they would lose their civil and religious liberties.

After the Irish Revolution 1916-1923 and the Anglo-Irish Treaty 1922, Ireland was partitioned into a 26 county Irish Free State that later became the Republic of Ireland and the unionist dominated six county Northern Ireland . Between the late 1960s and the late 1990s, County Tyrone was the scene of vicious sectarian warfare between loyalist Protestants and Catholic nationalist republican paramilitary groups. The 1998 Good Friday Agreement secured an uneasy peace and in the early 21st century a process of peaceful reconciliation was ongoing.