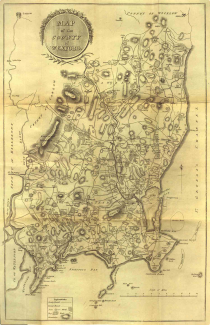 Robert Fraser completed his statistical survey of Co. Wexford in 1807 on behalf of the Dublin Society. He was an experienced statistician who had already completed similar surveys of neighbouring Co. Wexford and also Cornwall and Devon in England.The 151-page report investigates the habits of Irish farmers, their lifestyles and the agricultural economy of Wicklow.

19th century Wicklow was typical of most of Ireland where the majority of the land was owned by a few large Anglo-Irish Protestant landowners and rented to the native Roman Catholic Gaelic Irish peasantry. The incomes of these landowners also included revenue from the produce of their tenants’ farms. The tenant farmers themselves often lived in wretched poverty with barely enough to subsist complicated by large numbers of children, high infant mortality and the ever present threat of eviction and starvation.

The upkeep of their houses, farm buildings and maintenance of their rented land was the responsibility of the tenants with little or no input from the landowner. Despite improvements made to the property, if a tenant fell behind in his rent, he could still face eviction. By the early 19th century rents had increased in rent over several decades with the result that farmers found it increasingly hard to meet the demands of the landlords.

Fraser was unimpressed by livestock rearing in Wexford principally pig and cattle rearing in Wicklow which he believed was 'deficient.' He recognised that the poverty of farmers meant that they were in no position to use more advanced methods of agriculture like that in Fraser's native England . Fraser was even more critical of sheep rearing:"Hardly anything can be worse than the common breed of sheep in the county of Wexford , long legged, narrow backed, large head, large bone and wild as deer." Fraser encouraged the rearing of the Border Leicester breed which he believed was best suited to County Wexford 's conditions.

Fraser was very impressed with poultry rearing and bee keeping in Wexford at which even the poorest farmers were very successful. The birds were fed with buttermilk, potatoes and barley. The honey from hives was made into mead. Fraser discovered the while grain was the predominant crop grown in Wexford and throughout Ireland , nonetheless the basic source of nutrition for the common peasants was potatoes. The potato was ideal for the cold wet Irish climate, was easy to grow and a small patch could feed an entire family for the entire year but was susceptible to blight. However their potato diet was supplemented with meat twice a week as well as beans and turnips. Oatmeal was typically eaten as a breakfast.

The barony of Forth and Bargy had been settled by Vikings and later Norman settlers. Their descendents still spoke a local dialect called Yola and in his book Fraser records some words and grammar. The language was going into decline and finally died out at the end of the 19th century due to the influence of Modern English and interaction with the native Irish. While the south of the county retained its Norman heritage the north of the region was predominantly Gaelic in character.

The purpose of Fraser's survey was to demonstrate Ireland 's underdeveloped state vis-ŕ-vis his native England . At the time Ireland was politically integrated into the United Kingdom and Fraser encouraged more investment to further the development of the Britain 's closest neighbour and sister island.

Irish dependency on the vulnerable potato crop was cruelly exposed in the disastrous Great Famine that witnessed a million deaths from disease and hunger. In subsequent decades emigration led to an exodus of millions of Irish to the New World and the British overseas colonies. The threat of renewed famine, the rise of land agitation and agrarian violence led to the rise of Charles Stuart Parnell, his Irish Parliamentary Party and the Land League.

By the 1890s and the early 20th century the landlord system was broken up and the majority of formerly tenant farmers now owned their land. The economy grew as the demands for agricultural production expanded, the rail network extended into every corner of the island and diets improved dramatically.