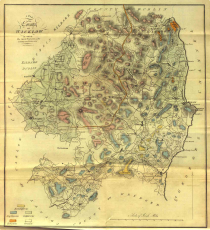 Map of Wicklow, taken from General View of the Agriculture and Mineralogy, Present State and Circumstances of the County Wicklow, 1801

Map of Wicklow, taken from General View of the Agriculture and Mineralogy, Present State and Circumstances of the County Wicklow, 1801

Robert Fraser's General View of the County Wicklow was published in 1801 and concerns itself principally with agricultural and mining activity in the region. It also covers a diverse range of other general subjects such as population, towns and villages, navigation and transport, education, manufacturing and the welfare of the common people. The work gives a revealing insight into County Wicklow society at the turn of the 19th century immediately in the wake of the 1798 rebellion.

In ancient times gold, silver, copper and tin were mined across Ireland . It is ironic that the 1798 rebellion led to the discovery of ore in the Wicklow Mountains . The road was built to facilitate troops to enter the heart of the mountains to defeat the rebels. Mining was most successful in the area of Glendalough and Glendasan where an engineer named Thomas Weaver found lead and other metals. Mining continued through the 19th century until the mid-20th century.

The agricultural system in Wicklow reflected the same tenancy system across the island of Ireland . In ancients times the dominat clans in Wicklow had been the O'Byrnes and the O'Tooles before the Norman conquest. After the Cromwellian and Williamite Wars an Anglo-Irish Protestant elite controlled the majority of the land in the county and the majority of the Catholic Gaelic Irish were dispossessed and reduced to poverty.

Fraser describes how the peasants lived in wretched conditions and remarks that the inhabitants mud cabin that would 'cost a pound or two or more' were usually paying rents of two guineas or more. Fraser claimed that many inhabitants of County Wicklow did not have sufficient income and had to beg or steal in order to survive. The diet of most of the poor was potatoes which was vulnerable to blight. In the mid 19th century this would be the cause of approximately a million deaths due to starvation and disease in the Great Irish Potato Famine.

The conditions described by Fraser would change dramatically in the late 19th century when the Land League and the Irish Parliamentary Party led by Charles Stuart Parnell forced through land reform legislation. This movement ultimately broke up the landlord system and by the turn of the 20th century most Irish farmers owned their own land, were becoming wealthier and could afford to feed themselves.