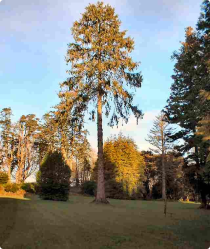 Description: A large and very distinctive spruce with branches upcurved at tips and long pendulous branches. The needles are up to 4cm long and are dark green. The cones are up to 17cm long and purple when mature. Young trees are vulnerable to frost damage, but mature trees are hardy.

Origin: The West Himalayan Spruce is found in at altitude in the Western Himalayas. It was the only 'weeping' spruce in cultivation until the introduction of the American Brewer's Spruce. It was introduced in 1818.