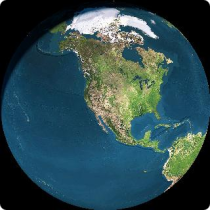 The opening up of North America to European settlement meant that American trees soon began to flood into Europe. American forests had not suffered the same loss of species as Europe during the Ice Age so they were species rich in comparison. However early introductions from the Eastern seaboard did not always thrive here. Our late frosts and mild winters were not always to their liking.

This was to change dramatically in the early 19th Century with a raft of introductions from the Pacific North-West of exotic conifers. The wet temperate climate here was similar to Ireland which meant that these trees usually grew better here than in Britain or Europe.

Ireland's relatively mild climate meant that even Californian introductions grew well. A change in gardening styles in Victorian times saw a return to the formality of early times plus the planting of exotic, often evergreen trees in arboreta. The American North-West was to provide the major component of this planting in Woodstock.