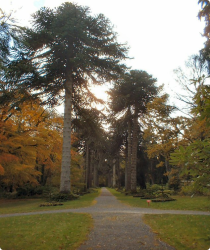 The Monkey Puzzle Walk was planted in 1844, it is not clear if these trees were raised from seeds from William Lobb's reintroduction. Originally 31 pairs were planted along an existing avenue. The initial planting did not thrive. This was due to a compacted pan in the underlying subsoil causing poor drainage.

In 1860, Charles McDonald, a new head gardener arrived in Woodstock. He resolved to solve this problem. His solution was to install drains and replant the young trees on mounds of better soil. Remarkably the young unhealthy trees survived this rough treatment and were soon thriving.

By the 1870 a pair of the Monkey Puzzles had disappeared and being replaced by two Silver Firs. By the time of restoration only 29 trees had survived, one of these in poor condition. This was mainly due to the drains having not being maintained resulting in poor drainage. Also since 1922, forests trees, brambles and laurel have encroached on the avenue adding to the trees' problems.

Since the start of restoration, this vegetation has been removed, drains fixed and ivy removed from the trees along with any necessary surgery. More importantly new Monkey Puzzle seedlings have being imported from Italy and mound planted to replace the losses. The new arrivals are doing well and the original form of the Walk is re-emerging.

Previous - The Arboretum
Next - The Rockeries