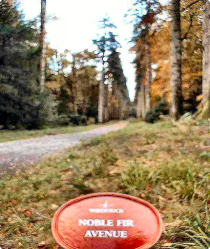 The Silver Fir walk was planted in 1878, the year of the death of William F.F. Tighe. Although the walk is called the Silver Fir Walk, the species used was Noble Fir – Abies Procera, more suited to Irish conditions. It runs north west/south east on the south east side of the house.

The trees are spaced between 6 and 7m apart. Originally 44 trees were panted on each side of these 37 survived on one side and 32 on the other. Woodstock is underlain by a hard subsoil pan leading to poor drainage.

After the fire of 1922, blockage of these drains in addition to competition from wild rhododendron, brambles, ivy and saplings lead to losses. Since restoration, this undergrowth has been cleared, drainage problems addressed and new saplings planted on mounds to replace the casualties.

Previous - The Rockeries
Next - The Winter Garden